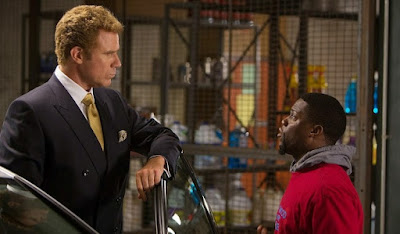 Premise: wealthy white man gets convicted of a white collar crime and turns to the only black person he knows, who he assumes has experience in prison based almost solely on his race, and hires him to train him so that he'll be able to survive in prison. There are very few ways in which this couldn't end up being racist. At first it seems like Get Hard might, might, have found that way by using the premise to critique white privilege and the cluelessness of the 1%, but fairly quickly it reveals itself to be toothless and uninterested in doing anything by picking the lowest hanging fruit. Granted, once in a while the lowest hanging fruit turns out to be funny, but Get Hard's reliance on it also condemns it to be an utterly forgettable piece of work.

Will Farrell stars as James King, a hedge fund manager engaged to Alissa (Alison Brie), his boss' daughter, and going through life blissfully unaware that he's the very embodiment of what's wrong with the world today. On his birthday he's arrested by the FBI for fraud and embezzlement and immediately encouraged by his boss/future father-in-law, Martin (Craig T. Nelson), to accept a plea deal for a short sentence, but instead insists on his innocence and ends up being sentenced to 10 years at San Quentin. Given 30 days before the start of his sentence, James decides that the prudent thing to do is hire someone to coach him on how to survive jail rather than, you know, work on proving that he's innocent. The only person James can think of to help him in this regard is Darnell (Kevin Hart), the man who washes his car and who he assumes has some prison experience due to his job and the fact that he's black. Darnell hasn't, in fact, ever been in jail but when James agrees to pay him $30,000.00, which Darnell needs so that he and his wife can put a down payment on a house, he decides to put on an act and pretend that he knows what he's talking about.

Darnell takes over James' house, turning it into a makeshift San Quentin, with James' staff all too happily stepping in to play the role of guards. As the days tick away, Darnell tries to prepare James in various ways, from trying to help him develop a "mad dog" face that will intimidate other inmates and keep them at a distance, to trying to teach James how to defend himself and how to create and hide a shiv. When it becomes apparent that James isn't going to be able to use his brawn to survive to the end of his sentence, and when he balks at the suggestion that he learn how to perform sexual favors to get by, Darnell hits on the idea of getting James some gang protection by appealing to his cousin, Russell (T.I.), the leader of the Crenshaw Kings. When this idea goes bust, too, James and Darnell finally getting around to looking at finding the person who set him up (which isn't that difficult, as Darnell finally demonstrates, when James sets out the players, and their official roles in the company that he works for, on a white board) and keeping him out of prison entirely.

Get Hard is a dumb movie. I wasn't really expecting it to be brilliant, or anything, but it could have done more with its premise and it actually demonstrates as much in its early going. There is an opportunity with this film to make an incisive piece about the insidious nature of privilege and the way that the 1% have wrapped themselves in the myth that the United States is the land of opportunity, where absolutely any person can get rich simply by working hard enough for it, in order to protect themselves from criticism and deflect it back onto their detractors. It's there in a moment when Martin tears up as he tells James about how he started his company and refers to himself as a "self made man" even as he acknowledges that his company got off the ground with an investment from his father of several million dollars. It's there in the moment when James lectures Darnell for asking him to invest in his business, telling him that all he needs to do is work hard and he'll achieve his dreams. James and Martin and their ilk are the embodiment of the saying "born on third base and think they hit a triple," people who are so cushioned by entitlement that they are seemingly incapable of understanding how they were born being given the "hand up" that they'll denigrate other people for seeking. There's plenty here that could be used for a really biting film, but aside from a couple of moments like those I've mentioned, Get Hard quickly shies away from going there and instead opts for something much softer and much (much) more played out.

The structure of Get Hard's story goes something like this: scene with a race joke - scene with a rape joke - scene with a race joke - scene with a rape joke - and on for 100 minutes. The repetition would be tiresome even if the screenplay managed to do something daring with either kind of joke, but instead it just takes the opportunity to make the most obvious, lame, and worn out jokes possible. Because the film stars Farrell and Hart, there are nevertheless moments which actually land and are genuinely funny, but on the whole the film is just so timid and limp that they can't save it. Get Hard isn't the only clunker that either Farrell or Hart have in their filmography, but it's bound to go down as one of the worst films either of them will ever make.
Posted by Norma Desmond at 8:00 AM

Your first paragraph sums it all up, perfectly. It squandered any opportunity it had to be genuinely funny and insightful and wasted it on a never-ending succession of dick jokes and racial stereotypes.