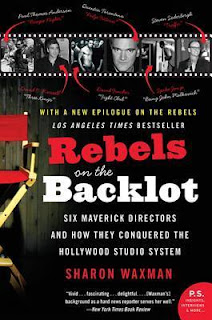 Six directors, by any measure amongst the most important of the last twenty years: Quentin Tarantino, Steven Soderbergh, David Fincher, Paul Thomas Anderson, David O. Russell, and Spike Jonze. Sometimes allies, sometimes enemies, but all, apparently, with mother issues. Sharon Waxman's Rebels on the Backlot sometimes strains to create a true sense of community and connection between them (and other directors who are only mentioned briefly, included as part of what Waxman believes to be the "rebel" directors of the 1990s, but who presumably wouldn't grant her as much interview time as the six who make up the bulk of the book), but the behind the scenes looks she provides at the directors' works throughout the 1990s are invaluable. It sometimes drifts a little further into gossip than it absolutely needs to, but Rebels on the Backlot is nevertheless a largely entertaining and informative work.

The weakness of Rebels becomes apparent fairly quickly, as Waxman makes it clear that though she admires the work of the directors, she kind of detests them as people (with the possible exception of Jonze who, unlike the other five, comes off more like a semi-literate manchild with the enthusiasm of a puppy, rather than an asshole). When she discusses the films, the tone is typically reverent, but when she discusses the directors, there's definitely an sense that she wants to take them down a peg so that they might atone for the hubris which allowed them to push through and make those masterpieces in the first place. Granted, they all seem kind of like dicks (Anderson, in particular, comes off as prone to tantrums), and given the rampant, institutionalized misogyny of the film industry, I'm not exactly broken up about seeing men called out for their ill-treatment of the women in their lives, but, really, I'm far less interested in hearing about Tarantino's bad hygiene than I am about the drama surrounding writing credit for Pulp Fiction. When Waxman strays from the actual issue at hand - the films - the book starts to feel distinctly like score settling and those parts of the book are easily the least compelling.

There's also a minor problem with Waxman's thesis that the so-called rebels were a tight-knit group akin to the auteurs of the New Hollywood era. Although she establishes that friendships and rivalries existed between the six core filmmakers explored in her book, as well as other young, cool filmmakers, Rebels never truly develops a sense of them being part of a real community; rather they seem like individual filmmakers who are each in their own little bubbles, occasionally interacting with each other. This feeling is only underscored by Waxman's attempts to shoehorn other filmmakers into the story, relating brief stories about directors like Wes Anderson and Kimberly Peirce which read like odd diversions, given that Waxman never really provides evidence that either is a participating member of the rebels group (which, again, never really seems like much of a "group"), and that these stories are dropped in seemingly at random. Although I would love to know more about the behind the scenes process of both filmmakers, their very brief inclusions here just serve to chip away at the already shaky cohesiveness of the book as a whole.

That being said, what Waxman does right, she does very right. When it comes to the six filmmakers she qualifies as the "official" rebels, she goes into great detail describing the process of making their most celebrated, and their least celebrated, works throughout the 90s (Soderbergh, in particular, has a very uneven career during the period Waxman examines). She delivers on set stories (including stories about the notoriously prickly relationship between Russell and George Clooney while making Three Kings) and also goes into a fair amount of depth regarding the business end of things, detailing everything from battles over the Fight Club poster to Anderson's wars over editing interference on his films and Soderbergh's fight to get a film as uncommercial as Traffic made. The parts of Rebels which deal with the machinations of various factions over works now considered masterpieces is fascinating and, despite Waxman's overall view of the directors as somewhat petty manchildren, ultimately shine a sympathetic light on these sometimes "difficult" men. The directors become sought after precisely because they've created something dangerous, something that tapped into the culture and provided something different and exciting. And then, once the money men secure the directors for projects, they do everything they can to undercut the directors' visions in order to make the projects "fit" with everything else that's out there. No matter how immaturely or badly the directors may act, it's difficult not to understand their frustration whenever studios start trying to strong-arm them in the direction of making their work more generic and safe.

Although, as I said, Rebels takes some ultimately useless forays into gossipy territory, when it focuses on the actual work of a group of filmmakers who produced some of the most defining films of an era, its an incredibly good book. Pulp Fiction, Three Kings, Boogie Nights, Fight Club, Being John Malkovich, Traffic - an in depth exploration of the making of any one of these films would make for a book worth reading, getting to explore all of them (and many more), is an embarrassment of riches.

Next Month: Nicholas Ray: The Glorious Failure of an American Director
Posted by Norma Desmond at 8:00 AM