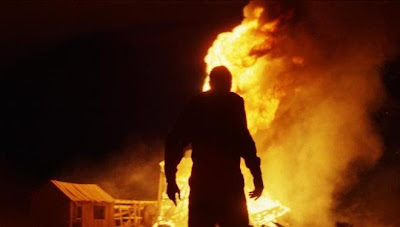 He is a man of singular purpose, a man who will settle for nothing less than total domination. Plainview is his name, and it’s the way he sees the world: there is the goal and the path towards it and nothing else. Anything, or anyone, who threatens to get in his way will be steamrolled and crushed into dust, and even those who stand with him will have to be sacrificed in the end, because there is only room enough for him at the top. The character, the performance, and the film itself are titanic achievements, masterworks from an actor and a director who have experienced no shortage of critical acclaim in their careers. There Will Be Blood isn’t just one of the best films of the 21st century, it’s one of the best films ever made.

After an opening sequence – largely wordless and filled with tension and intensity – that firmly establishes Plainview (Daniel Day-Lewis) as a solitary man, the film flashes forward several years to a time when Plainview has reinvented himself as a “family man” with the aid of his son, H.W. (Dillon Freasier). Unknown to everyone but Plainview, H.W. is not biologically his son, but a child he inherited after the boy’s father was killed in an accident while drilling for oil, and so Plainview has essentially made his fortune on that man’s blood both literally and figuratively, striking it rich by striking oil, and increasing his holdings through the image that H.W. helps him create. In a sense H.W. is his partner (and is sometimes referred to as such), but in reality he’s little more than an appendage, something that is useful to Plainview until he isn’t and can finally, and brutally, be discarded. In his mind, today's ally is tomorrow's enemy.

Although an argument could be made, thanks to Day-Lewis’ layered performance and writer/director Paul Thomas Anderson's complex depiction of the character, that Plainview has genuine paternal affection for H.W., he is ultimately not driven or sustained by love. He is an isolated character who cannot meaningfully connect with anyone, who cannot surrender even the smallest degree of power to someone by trusting them. His one true need is power, and the only way that he knows how to engage with others is through domination. When he arrives in the village of New Boston – scouting out the land owned by the Sunday family, where the oil is literally bleeding out through the soil – he’s quick to make his presence known, buying up everything (except, importantly, one plot of land), and sparking the rivalry that will drive much of the narrative forward. Plainview’s nemesis is Eli Sunday (Paul Dano), a local preacher and faith healer whose aim is to control and shape the village’s spiritual life, and the relationship between the two is always shifting in accordance with the changing balance of power between them. For a time Sunday believes that he has won, having forced Plainview to submit to being "saved" in the church, a fact which makes Plainview’s final strike – years and years after the fact - all the more potent. It’s a psychological strike followed swiftly, definitively, by a physical one and exposes just how twisted Plainview really is. It’s not enough for him to win – it’s not even enough for someone else to lose. He has to utterly annihilate the competition and he has the patience to wait for the exact moment when he can do the most damage.

Day-Lewis carries the film with a slow churning power always on the verge of erupting. His is a performance that makes it impossible to imagine any other actor in the role, and Anderson tailors the film to Day-Lewis’ considerable strengths as an actor. It’s an absolutely mesmerizing performance that gives the proceedings that extra hint of danger that makes it so compelling and inherently watchable. The world that Anderson creates in There Will Be Blood is ugly and devoid of warmth, but that’s part of what makes it so brilliant. The film itself is as unapologetic and unrepentant as its protagonist, a hard gem that at once fascinates and repels.
Posted by Norma Desmond at 8:00 AM