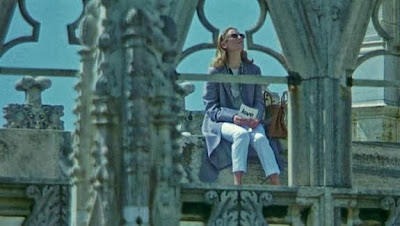 From the outset, as a montage depicts ancient and modern structures existing side by side, I Am Love announces itself as a film about the struggle of the traditional and the new to coexist. The family at the story's center live lives of tradition and ritual, and what ultimately tears them apart is the fact that some want to cling to the old ways, while others are desperate to break out and adopt new ways of living and being. While there may be room enough for architecture of various eras in Milan, mindsets are a different thing, and as those seeking newness push ahead, those anchored to tradition are bound to get left behind. It's that push/pull that drives the characters, giving color and texture to their shifting relationships. That sense of movement is present throughout I Am Love, a film which lives and breathes and, thanks to a lively score by John Adams, sings and dances as well. It is also one of the greatest showcases yet for the many talents of Tilda Swinton.

Swinton stars as Emma Recchi, the Russian-born wife of a wealthy Italian businessman. She and her husband live in a massive home where their three children - Edoardo (Flavio Parenti), Gianluca (Mattia Zaccaro), and Betta (Alba Rohrwacher) - flit in and out as the ebb and flow of their lives dictate. As the film opens, the family is in a state of flux, its patriarch, Emma's father-in-law, having decided to retire and step down as head of the family business. To the shock of everyone, instead of passing the reigns on to his son alone, he splits the business by making his son and Edoardo co-heirs, declaring that it will take two men to replace him. The decision causes a mild rift in the family, as Edoardo is determined to carry on business in the manner of his grandfather (who, shortly after retiring, passes away), while his father, supported by Gianluca, opts to go a different way and, eventually, to sell the business to foreign investors. Edoardo is devastated by what he sees as a betrayal of his grandfather's memory, but not as devastated as he will be later when he discovers how his mother has been occupying her time.

Though seemingly content, Emma's life has really been airless and repressed. Late in the film she reveals that Emma is not even her real name, but one bestowed on her by her husband when he brought her to Italy. Brought into this very ritualized family, she was given a specific role to play and has done so ever since, perhaps not even realizing how unfulfilling it is. It isn't until Betta goes away to university in England, experiences a period of sexual discovery, and returns to confide in Emma that she's a lesbian, that Emma herself begins to open up, pursuing an affair with Antonio (Edoardo Gabbriellini), a younger man and friend of Edoardo. Edoardo's discovery of the relationship leads to tragedy but, ultimately, is also leads to release. No longer feeling bound by the confines of her family life, Emma is freed to forge a new path, one in which an identity is not imposed upon her, but created by her.

I Am Love is preoccupied with the struggle between tradition and the new, but those positions as they relate to the characters are not necessarily fixed. The Recchi grandparents exist on the side of tradition - during the sequence which depicts the grandfather's birthday celebration he expresses disappointment that Betta, who gifts him with a drawing every year, has broken tradition by giving him a photo and announcing her intention to switch artistic disciplines - and Emma and Betta on the side of newness, but Emma's husband, Tancredi (Pippo Delbono), as well as Gianluca and Edoardo occupy more ambiguous positions. Tancredi and Gianluca embrace professional change, selling the business which has been the bedrock of the family's legacy, but are less open to change when it comes to the personal. Betta comes out to Emma and Edoardo, but decides that Tancredi and Gianluca wouldn't understand, and Tancredi, on learning of Emma's infidelity, responds by refuting her identity entirely, declaring "You don't exist." Edoardo, meanwhile, wants to hold on to the traditional way of doing business, but is open and supportive to Betta. He is not supportive of Emma's relationship with Antonio, for obvious reasons (not only is Antonio his friend, but the relationship obviously undermines his parents' marriage), and for slightly less obvious reasons (the homoerotic tension between Edoardo and Antonio hinted at throughout the film). Both aspects tie directly to the notion of family and continuity. The business publicly defines the family, giving them power and influence in addition to wealth, and giving them cultural roots. To sell is to create a break in continuity, to deprive Edoardo of something he wants to take over himself and then pass on to his own children. Meanwhile, the sexual awakenings of Emma and Betta threaten the family's continuity in a different way, breaking its traditional structure (the elder Recchis' relationship was also marked by infidelity, in that case on the part of the grandfather, but instead of ending the marriage the grandmother opted to look the other way, declaring after his funeral that what happened when her husband was with her was all that mattered) and depriving it of the pillars on which future generations can be built and supported.

Recurring motifs and mirroring help underscore the film's preoccupations (in the case of both Emma and Betta, sexual awakening is indicated by a haircut, and the difference between Emma's relationships with Antonio and Tancredi is indicated by a pair of scenes, one in which Antonio undresses her and one in which Tancredi covers her up), but while I Am Love has rich thematic threads, it isn't built solely on narrative. What makes the film so extraordinary is the elegant direction of Luca Guadagnino, which gives the story a sense of warmth and liveliness. This is a beautiful film, one which, despite its third act tragedy, ends on an enduring note of hope. Live, it says.
Posted by Norma Desmond at 8:00 AM