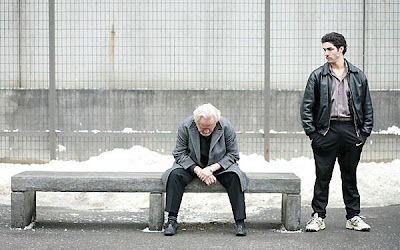 A young man goes to prison for a violent crime. He has no family, no friends, no money, no education – he’s the type of person designed to fall through the cracks. When he emerges back into the free world a few years later, it is not as a man reformed, but as a man who has learned how to be a better, and more dangerous, criminal. Jacques Audiard’s gritty and harrowing drama A Prophet is an indictment of both the criminal justice system and of the society that marginalizes the poor and leaves criminal enterprise as the only avenue for escape from poverty. Riveting from beginning to end, it’s the kind of film that you can watch over and over again and have it rise in your estimation each time.

A Prophet centres on Malik (Tahar Rahim), an illiterate young man who has spent his life in and out of the system and who is now of age to spend his next prison term in an adult facility. Once inside he finds himself isolated, unable to properly fit in with any of the groups inside – he’s Arab, which makes the white prisoners wary of him, but he isn’t Muslim, which makes “his people” distrustful of him. He’s vulnerable, which makes him an easy target for Cesar (Niels Arestrup), a Corsican mobster who essentially runs the prison. Cesar needs someone to get rid of Ryad (Adel Bencherif), an informant being kept in custody until he testifies in court, and assigns Malik to the task, giving him the choice between taking the life of another or losing his own. Although Malik is no killer, he feels that he has no choice but to go through with it and afterwards becomes an accepted, but peripheral, member of Cesar’s group, assigned a servile role which will see him spending the next few years as the mobster’s whipping boy.

Malik attaches himself to Cesar for protection (though he is abused and threatened by Cesar pretty much continuously), but also for educational purposes. As the years go by, Malik watches and learns and most importantly bides his time, waiting for his moment to present itself. His rootlessness becomes his greatest asset, allowing him to weave himself in with various factions, creating a diverse network of alliances that will eventually make the growth and consolidation of his power unstoppable. During his years in prison, Malik goes from an impulsive, hot-headed kid completely alone in the world to a sophisticated and well-connected criminal capable of incredible violence and Machiavellian machinations. He gets a literal education in prison, learning to read and also learning to speak the Corsicans’ language by osmosis, but he also gets an education in how to build and maintain a criminal empire.

Audiard tells the story in chapter form, breaking up the narrative into sections and using that construction to introduce, and slowly weave together, a number of plot strands. A Prophet has an excellent sense of flow, one which unfolds at a fast pace that makes it seem far shorter than its two and a half hour running time. It has a vibrancy and energy that contrasts nicely with the story’s dark nature, and even though it is firmly rooted in realism, it doesn’t get derailed by its detours into the mysticism that leads to a supporting character declaring Malik to be “a prophet.” Although the violence of the film can sometimes be difficult to watch because it is so unflinching and brutal, the film itself is a beautiful piece of work from an emerging master.
Posted by Norma Desmond at 8:00 AM