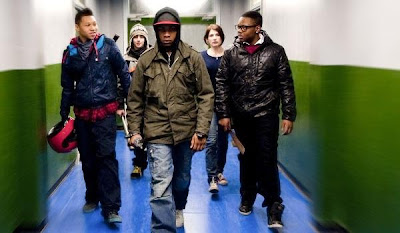 Attack the Block is a monster movie, but it's more than that. It's charmingly low budget (compared to Hollywood, CGI filled monster movies), and possessed of a sharp social consciousness that folds easily into its story. It's also delightful and entertaining, a small scale action movie that manages to be the equal of its bigger budgeted genre brethren. Mostly, though, it's a fine introduction to John Boyega, a charismatic young actor who will hopefully feature in more films in the future.

Attack the Block begins with a typical horror movie scene: a lone woman - Sam (Jodie Whittaker), as we'll later learn - walks home by herself late at night and only realizes once it's too late that she's walked into a trap. Five teenagers - Moses (John Boyega), Pest (Alex Esmail), Dennis (Franz Drameh), Jerome (Leeon Jones), and Biggz (Simon Howard) - surround her and demand her phone, her purse, and a ring she has on her finger. She gives them everything they demand and then escapes when a meteor crashes into a nearby car, distracting the teens. As she runs off, they move to investigate and discover that what's just fallen from the sky is a strange, hairless creature which attacks Moses and then runs off, chased and eventually killed by the boys, who hope that they can get some money for it. For the purposes of safe keeping, they haul it to the safest place they know: the penthouse of their tower block, where their friend, Ron (Nick Frost), grows marijuana for his boss, Hi-Hatz (Jumayn Hunter). Ron and Hi-Hatz agree to let the boys keep the dead creature in the fortified "weed room" and then, after the boys witness several more meteors dropping out of the sky and landing nearby, they decide to go back out and collect more creatures for profit.

To their surprise, what they find when they go back out is very different from what they brought to the weed room. Instead of a relatively small, hairless creature, they encounter much larger creatures covered in black fur, possessed of huge claws and glowing fangs. They run for it and the group gets separated, with Biggz ending up in a garbage container where he'll spend the rest of his night, and Moses being apprehended by two police officers who have been riding around with Sam, looking for the kids who mugged her. As Sam and Moses sit in the police van waiting, the creatures attack and kill the two police officers. Trapped, they're rescued by Dennis, who speeds the van away and ends up crashing right into Hi-Hatz in his car. Once again, Sam escapes, but now the boys have two problems: the creatures are still coming for them, and Hi-Hatz, who doesn't believe that they're dealing with aliens, wants revenge for his car being ruined. The entire third act takes place within the tower block, where the boys and Sam are once again thrust together, dodging aliens and Hi-Hatz and trying to get out alive.

Despite the film's limited budget, the creature effects are quite effective, made more so by the judicious way that writer/director Joe Cornish uses the monsters. Most of them time they're more a vague idea - an outline in the distance, glowing fangs in the darkness - than an actual fact on screen. Cornish makes excellent use of suggestion throughout, particularly during the "trapped in the tower" section of the film, as the group is trying to find a safe place in a building riddled with aliens. In what is easily the film's most intense sequence, the group tries to make their way down a hallway through the thick smoke left by fireworks they've used to distract the aliens. In creating the means to get themselves from point A to point B, they've also left themselves vulnerable to attack, as they can't see more than a few inches in front of them, and disorientation will lead to their numbers being culled before they reach what they hope will be safety. Although the plot consists of a lot of running to and from various points inside the building, Attack the Block never seems repetitive; Cornish finds ways to make each action set piece exciting and tense.

Although the film's primary focus is on delivering the otherworldly action goods, it also takes the time to root itself in real world concerns. This isn't just a story about humans versus aliens, but about poverty and disenfranchisement, and the strange bonds that can be created by shared circumstance. The boys - Moses, in particular - have less than ideal home lives and limited circumstances which make crime seem like the only viable option, and Moses presents a theory that the government has sent the aliens to their neighborhood because drugs and guns aren't killing minorities fast enough. Later, after having bonded somewhat with Sam and learning that she lives in the tower, too, Moses tells her that they wouldn't have robbed her if they'd known that she lived in the tower, as living there makes her one of them. To them, it's the people of the block against the rest of the world, a world which has been against them at every turn of their young lives. The film does not belabor this point, but it returns to it often enough to develop it as a theme. That being said, Attack the Block does leave me with one major question: how is it that even in a film that begins with a predominantly minority cast, it's still all the white people who end up alive at the end?
Posted by Norma Desmond at 8:00 AM