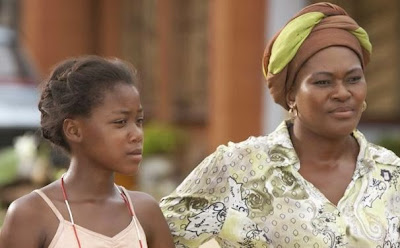 It's silence that's the killer. In a region where HIV/AIDS is surrounded by stigma, superstition, and misinformation, treatment for those afflicted with the disease is hard to come by, and even acknowledgement of it can become a source of shame for entire families. Oliver Schmitz' Life, Above All explores this big topic on a small, and very human scale, using it as the backdrop for a coming of age story. Although the film fumbles slightly at the end, swaying just a little too far into the realm of sentimentality, it's nevertheless a strong, and very moving, film.

Khomotso Manyaka stars as Chanda, a 12-year-old whose home life is increasingly in turmoil. Her father is long since dead and her baby sister has just died. The cause of the baby's death is never openly acknowledged, but isn't exactly a secret either, in the closely knit village. Chandra's mother, Lillian (Lerato Mvelase), tries to hold things together for Chandra and her two remaining siblings, but her health quickly begins to decline, becoming a new source of rumors. Chandra's stepfather, Jonah (Aubrey Poolo), is a drunken mess when he's around at all, making thinly veiled accusations about the cause of the infant's death, and stealing the money set aside for the burial. As her home life comes apart, Chanda finds support in her friend, Esther (Keaobaka Makanyane), but that comes at its own price: an orphan who presents as an easy target for gossip and social persecution, Esther is ostracized by the small community and Chanda finds herself treated as guilty by association and pressured to drop the friendship.

The source of much of that pressure is Mrs. Tafa (Harriet Lanabe), a friend of Lillian's and a neighbor. As the film opens, Mrs. Tafa tries to impress upon Chanda the importance of sticking to the official narrative of her sister's death, though it's unclear if Chanda really understands the cause of death at that point. As Lillian's own condition begins to become apparent, Mrs. Tafa continues to encourage the pretense that Lillian is not afflicted with HIV, even as Lillian is forced into self-exile in an effort to spare her children the shame of her illness. Increasingly angered by the air of secrecy surrounding her mother, and unwilling to bow to the pressures of her community and Mrs. Tafa, in particular, Chanda opts to take matters into her own hands by tracking her mother down and bringing her back, and then standing up to those who would prefer the "out of sight, out of mind" method of dealing with the AIDS crisis.

Life, Above All moves at a very easy pace, content to slowly establish the rhythms and fissures of its small community, and allowing characters to flow in and out of the story at regular intervals. The air of secrecy and shame regarding HIV is established by, essentially, not being acknowledged at all, at least not until more than half-way through the film. The strategy has the effect of descending the story into the mood and mindset of its characters, creating a level of intimacy between subject and audience that few films are able to achieve, and which is buoyed by the naturalistic acting of its cast of largely non-professional actors. There's a powerful and heartbreaking sense of realism to the film, particularly in the sequence where Chanda searches for her mother and finds her banished to fend for herself in the middle of nowhere. Manyaka's performance is remarkable, both for her age and level of experience, and for the fact that so much of the film rests on her shoulders and on her ability to demonstrate her character's growing strength and determination to follow her own moral compass. To date, Life, Above All is Manyaka's only screen credit, which is a shame because she proves herself here to be a very talented performer.

As I said at the top, the film does get sentimental towards the end. That moment brings a much needed sense of relief after an increasingly fraught story, and it's difficult to argue that the film hasn't earned the right to break with its firmly established realism for just that moment. Chanda has been through so much that you want her to have that reward, even if it is a small one and even if it will only be fleeting, but that moment does sort of diminish what made the film work so well up until that point. It doesn't ruin the film by any means, but it does take you out of the story just as its coming to its conclusion. Still, Life, Above All is a very good film with far more strengths than weaknesses.
Posted by Norma Desmond at 8:00 AM