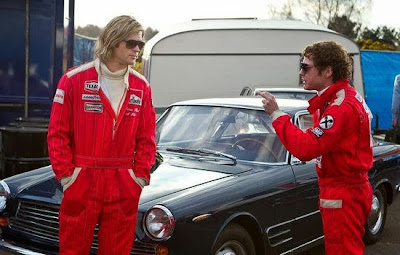 A reckless, charismatic hot shot versus a less than likeable, but technically proficient perfectionist. Rush is sort of what Top Gun would have been like if Iceman had been given equal narrative importance as Maverick. Based on the true story of the 1976 Formula One season and the rivalry between British driver James Hunt and Austrian driver Niki Lauda, Rush is an often exciting, and surprisingly stylish, film from Ron Howard, though for a film about racing, it's not very well paced. Still, it's a great looking film, even if it isn't one that digs particularly deep.

Rush is a story of competition, both from within the narrative and from without. Its two protagonists share narration duty at the outset, Lauda's voice over giving way to that of Hunt and then back again as they set the scene for the story. The two meet on the Formula Three circuit, each pursuing careers as racers despite their families' disapproval, and each hungry to move up to the big leagues of Formula One. Lauda gets there first, taking out a loan and buying his way onto a team that also features Clay Ragazzoni (Pierfrancesco Favino), who later brings Lauda along when he joins Scuderia Ferrari. Meanwhile, Hunt makes his way to Formula One as well, eventually joining McLaren. As the 1976 season begins, Lauda gets off to a strong start, made stronger after Hunt is disqualified from the Spanish Grand Prix when inspection finds that his car is too wide. Tinkering with the vehicle over the course of the season leads to disaster at first, but eventually his team is able to perfect the design and Hunt resumes his chase of Lauda, quickly catching up to him in the season's points.

The pivotal moment in the rivalry takes place at the German Grand Prix, when weather conditions prompt Lauda to hold a driver's meeting to vote on whether or not to go on with the race, which devolves into a pissing match between Lauda and Hunt. The race goes on and Lauda suffers a near fatal crash that results in a six week stay in the hospital, where he undergoes treatment for third degree burns and toxic fumes in his lungs while watching footage of Hunt continuing to win races in his absence, closing the points gap between them. Against doctor's orders, Lauda returns to participate the Italian Grand Prix and then in the season ending Japanese Grand Prix where, once again, weather conditions make the track especially dangerous. This time, however, the choice of whether or not to go on is not with the drivers, but with the TV networks who stand to make a mint off the final chapter of the season's driving narrative and so, in the midst of a torrential downpour, Hunt and Lauda face off one more time to determine who is the champion.

Rush spends a lot of time on the race track, which is where it seems to be the most comfortable. Though he's always been a dependable director, Howard has never been a particularly innovative one, choosing instead to play it safe and conform to genre expectations and not much else. Here, however, he puts the audience not only in the driver's seat, but inside the cars themselves, creating thrilling sequences that could easily qualify as among the director's best. The races all sort of blend together, but distinguishing between them isn't really the point. The point is capturing the energy of sport and competition, that sense of all consuming need that inspires the racers to hit the track time and again despite the high probability of injury or death.

Where the film falters is when it leaves the track. Although Hemsworth is solid as the playboyish Hunt and Bruhl is excellent as the more complicated, and far less amiable Lauda, both are ultimately confined by the film's limited interest in their characters beyond the rivalry at the story's center. Hunt's personal life is marked by a revolving door of women and one wife, model Suzy Miller (Olivia Wilde), who exits his life almost as quickly as she enters it, though the film apparently believes that that's enough to make the audience emotionally invested in knowing whether or not she sees Hunt's climactic triumph or defeat. Lauda, meanwhile, marries Marlene Knaus (Alexandra Maria Lara), who the film would have us believe gives him something to live for, though it gives her little to do other than frown and worry. There isn't really much to invest in beyond the rivalry, which makes Rush more of a short-term pleasure than a film of lasting impact.
Posted by Norma Desmond at 8:00 AM

tell me about it. the film's limited interest in these characters that it build itself around is the thing that destroys the movie.

Yeah, I'm kind of surprised at the amount of critical fawning it's received in light of that.