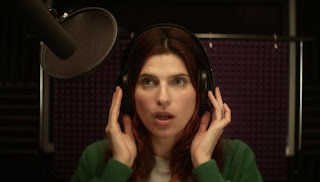 In a world where women are voiceless, one woman will make hers heard. Or something to that effect. The point is, in an industry where decent roles for women are few and far between, Lake Bell wrote and directed one for herself. Granted, it sucks that an actress would have to go to such great lengths just for a chance to play something other than the love interest or the best friend in a film, but you can't really argue with the results here. In a World... isn't a perfect film, but it's a strong debut and coming out during a season when most films have the depth of a puddle, it's nice to see a movie that actually wants to mean something.

Bell stars as Carol, a vocal coach who wants to follow in the footsteps of her father, Sam (Fred Melamed), and become a voice over artist. Unfortunately for her, the voice over industry is not just a boys club, but a handful of boys club and breaking into it, especially as a woman, is near impossible. Sam, who is one of the fortunate few able to make a living as a voice over artist, is less than supportive of Carol's dream, encouraging her to stick to the vocal coaching and then kicking her out of his house so that he can move his much younger girlfriend (Alexandra Holden) in. Carol packs up and shuffles off to crash with her sister, Dani (Michaela Watkins), and brother-in-law, Moe (Rob Corddry), wallowing for a while before booking a voice coaching gig and stumbling into her big break by chance.

While coaching Eva Longoria so that she can learn to do a passable cockney accent, Carol offers to do a place holder voice over for a romantic comedy as the artist hired to do the recording, rising star Gustav Warner (Ken Marino), has called in sick. As it turns out, the studio loves Carol's recording and ends up hiring her for the gig, sparking a rivalry between Carol and Gustav, who happens to be Sam's protege. When the next big job comes along - voice over work on an epic quadrilogy called "The Amazon Games," in which the words "in a world..." will be resurrected - both Gustav and Carol are up for it, and when he finds out that his daughter is pursuing it, Sam decides to throw his own hat in the ring, upending his relationships with both his daughter and his protege.

Although the film only runs 93 minutes, it manages to pack a lot of plot into its running time - I haven't even mentioned the subplot involving Dani and Moe's martial troubles, a romantic complication in Carol's rivalry with Gustav, or her budding relationship with her friend, Louis (Demetri Martin), an audio engineer who helps her make her audition tape. In a World... doesn't always juggle all these plots gracefully, leaving the film feeling a little bit lumpy and resulting in a few threads being left untied (the Carol/Gustav plot never really gets resolved), but when it brings its focus back to the glass ceiling issue, it reveals its real strengths. When Gustav and Sam find out that Carol is a serious contender for "The Amazon Games," their unhappiness is less at the notion of competition, and more at the gall of an outsider trying to encroach on their territory, particularly a female outsider attempting what they see as an inherently masculine occupation (because Sam doesn't know, at first, that the woman who took Gustav's job is his daughter, the conversation inevitably veers into sexual territory). Later, the executive who decides which voice over will be used (Geena Davis, showing up for about two minutes and firmly demonstrating why she needs to be in more movies) tells Carol that the issue is about more than just this one voice over, but about changing the industry. What sets In a World... apart is that it doesn't just use feminist concerns as a premise around which to spin a comedy, it actually weaves its politics firmly into the plot and explores the issues surrounding it.

In a World... is also set apart by the way that it diverges from the typical format for a film of its kind. This could easily have been a brainless romantic comedy where the plot revolved around a love triangle between Carol, Gustav and Louis. Instead, the romantic plot threads are secondary. It really can't be overstated how refreshing it is to see a female character in a film whose primary concern is not whether or not she's going to get a guy (for much of the film, Carol actually seems completely unaware that she even has romantic prospects), but about her professional ambition. I don't know whether Bell is planning to write and direct another film, but hopefully she does; she clearly has something to say.
Posted by Norma Desmond at 8:00 AM