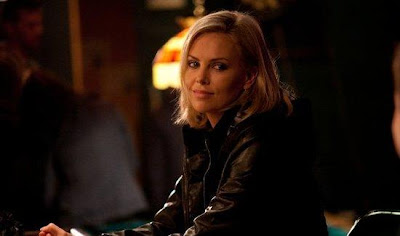 Mavis Gary (Charlize Theron) longs to return to her high school days because she believes that that was when she was at her best. What she fails to realize is that it wasn't so much that she was at her best in high school as that she still had people around to validate her awfulness. Reuniting writer Diablo Cody and director Jason Reitman, Young Adult is a film as acid as Juno was sweet, replacing a naive but likeable protagonist with one almost dangerously delusional and misanthropic. It's the feel good movie of the holiday season!

When we first meet Mavis, she's passed out in bed, beginning the day's battle against a hangover. We will find her in similar fashion throughout the film, though no one seems to notice (or, perhaps, care) that if she's not yet an alocholic, she's flirting with it pretty heavily - no one, that is, except for herself and when she shares her suspicions with her parents, they simply laugh it off. Mavis is the writer of a young adult series (though her name appears only on the inside jacket of the books while the covers credit the series' creator) struggling to write the book that will bring the series to a close, who finds herself completely derailed by the news that Buddy (Patrick Wilson), her on-again/off-again boyfriend from high school and college, has just had a baby with his wife. Projecting her own unhappiness onto her ex, she decides to leave her glamorous big city life behind and return to her hometown of Mercury.

On her return to town she connects with Matt Freehauf (Patton Oswalt), a former high school classmate that she doesn't remember until she realizes that he's "the hate crime guy" who got beaten up for being gay even though he isn't actually gay. Though she never spoke to him in high school, Matt becomes her confidante and tries to talk her out of trying to break up Buddy's marriage. But Mavis remains convinced that, despite all evidence to the contrary, Buddy cannot possibly be happy and powers ahead in her plan, eventually going so far that even she can no longer deny how unhinged she's become.

With such a singularly unpleasant protagonist, not to mention an ending that subverts the expectation that Mavis will learn anything, Young Adult will probably prove to be a polarizing film. Living in a state of prolonged adolescence is an unattractive quality in pretty much any adult and Mavis positively wallows in this state. Despite her own unhappiness, she still clings to the notion that just getting out of her hometown and moving to the city somehow means that she "wins" over her former classmates; when she overhears teenagers talking melodramatically about their lives, attributing an unwarranted level of complexity to their problems, she glows with recognition because her mindset remains in the same unsophisticated state. She cruises around town in the car she drove in high school, listening to a mix tape Buddy once made her, steadfastly refusing to grow up, all of which might make her insufferable were it not for Theron's finely calibrated performance. To so baldly play a character's negative qualities is brave all on its own, but Theron also mixes in an intense vulnerability that exposes the insecurity that lies at the root of Mavis' nastiness. It's in the way her eyes plead for praise when Buddy off-handedly asks her to sign a copy of one of her books, and in the flicker of hurt that emerges when he reveals that the book is for his niece. And it's in a marvelous scene towards the end that occurs between Mavis and Matt, after everything has blown up in Mavis' face.

Young Adult succeeds because of Theron's fearless performance, but also because Reitman and Cody do an excellent job at tempering her madness. This is a film that understands the difference between sympathy and empathy, that can feel sorry for the protagonist who has nothing but the glossy sheen of the image she's desperate to project, without sinking down into the dirt with her and asking us to excuse her behaviour. We don't root for Mavis and the film doesn't want us to. This is a portrait of youthful promise fallen into decay and the film is able to address that in a way that is very direct and very funny. Though I don't expect that Young Adult will be as widely embraced or celebrated as Juno, I have a sneaking suspicion that it might prove to be more enduring.
Posted by Norma Desmond at 8:00 AM

Theron gives a terrific performance. She elevates the movie by demonstrating her versatility. She almost makes you feel sympathetic towards this blonde, beautiful and sharp-witted anti-heroine. Oswalt deserves consideration for supporting actor as well. Great review.

you know, i think i do root for mavis. i don't know, i think we all have at least a little mavis in us. also, i think cody is the real winner here. her script, as usual is so spot on. she is perfect for this story. and theron shocks us by proving she can also make us laugh. love it.

Saw this movies in previews. Thin script. Very middlebrow concepts and left the film feeling cheated, since I wanted to see something with a little depth. Unfortunately, this film does not cut it. Charlize gives her best, but the less than enlightening script ruins the entire movie experience.