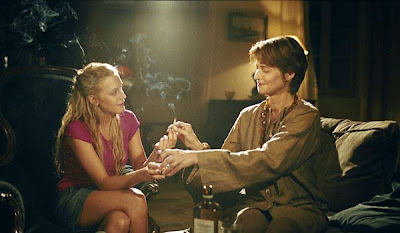 Francois Ozon's crime thriller Swimming Pool is one of those hypnotic, challenging films that you'll puzzle over and debate about long after seeing. It's a film that seems deceptively straight forward and then, in its final act, completely pulls the rug out from under you. This last act turnaround will be frustrating to some viewers, but for others it will simply add a new, rich dimension to what was already a first-rate thriller.

Swimming Pool centres on Sarah Morton (Charlotte Rampling), a writer of popular crime fiction struggling with a case of writer's block. Her publisher (Charles Dance) suggests that she go to stay at his country house in France in order that she can get the peace and relaxation she needs in order to start working again. Shortly after arriving at the house Sarah starts working again, the story suddenly coming easily to her, but her solitude is quickly disrupted by the unexpected arrival of Julie (Ludivine Sagnier), the daughter of the publisher. Sarah and Julie quickly find themselves at odds - Sarah wants peace and quiet to work on her book, which is difficult when Julie is up all night and bringing home a series of men - but slowly Sarah's annoyance turns to fascination and she finds that rather than being a hinderance, Julie may actually be the inspiration she needs.

Sarah becomes obsessed with Julie, trying to find out as much as she can about Julie's mother and about Julie herself. Although the two women begin to grow closer, their tentative bond is undercut by Franck (Jean-Marie Lamour), the owner of the local cafe with whom Sarah has developed a raport, but who Julie seduces. The tensions between the three lead to a murder and a cover-up... or do they? The film's ambiguous ending raises questions about how much of what came before was real, if any of it actually was, and how we view the film as a whole is determined by the "solution" that we fall upon.

There are a number of ways that the narrative can be viewed. The most popular theory is that Julie and the events which take place at the country house are entirely Sarah's invention, that it's the story she's writing or a simply a fantasy that she is inventing in her head. Another theory is that the publisher has two daughters, one acknowledged (Julia), the other secret (Julie), that the events in France really did happen and that Sarah, herself rejected by the publisher, decides not only to protect Julie from prosecution for murder but also decides to use her novel (called "Swimming Pool") as a means of forcing her publisher to "see" Julie. There is also an interesting (and rather compelling) theory put forward by someone on the IMDB board that Sarah has multiple personalities and that color cues indicate when Sarah is "Sarah" and when she's "Julie" (a blue motif indicates the former, red the latter). The fact that the film can be read in so many ways ensures that it has a degree of fascination built-in, but even laying the twist aside, it's still a very compelling and well-made thriller. Ozon and co-writer Emmanuele Bernheim, keep the tensions simmering throughout, ratcheting things up at a consistent pace until things finally explode. If there was no twist at all, Swimming Pool would still be a film worth talking about.

Aside from the masterful way that the film is constructed, the performances by Rampling and Sagnier also make Swimming Pool very much worth seeing. Rampling, no stranger to sexually provocative roles, plays Sarah as someone deeply repressed whose sensuality slowly uncoils itself as the film unfolds. Sagnier, meanwhile, brings a dangerous, reckless aura to Julie without ever obscuring the loneliness at her core. The two make an excellent pair, so excellent that it's odd that Ozon has never paired them up again. Although Rampling, by virtue of the greater size of her role, does the majority of the heavy lifting in Swimming Pool, this is definitely a duet, not a solo.
Posted by Norma Desmond at 8:00 AM