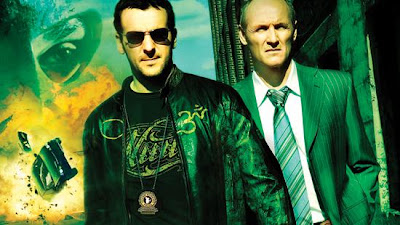 Year: 2006
Director: Eric Canuel
Great Because...: It goes for it and it gets away with it. In film the line between the good guys and the bad guys is pretty distinctly drawn, particularly in action films. Heroes are supposed to get the bad guys, not kill them in cold blood. Bon Cop, Bad Cop not only manages to allow its heroes to brutally eliminate the villain, it does so with a smile on its face.

Bon Cop, Bad Cop is your basic mismatch buddy cop movie, in this instance pairing up an uptight Ontario detective (Colem Feore's Martin Ward) and a too-cool-for-school Qeuebec detective (Patrick Huard's David Bouchard). The two are thrown together after a murder victim is found straddling the border between the two provinces and as they struggle to decide who has juridiction, the find that they're after a serial killer and that each murder is connected in some way to the National Hockey League.

The film climaxes (as films like this must) with a showdown between the two protagonists and the heretofore unstoppable killer in a remote and interesting location. This leads to a gun fight/car chase/hand-to-hand combat sequence which ultimately ends with a bomb being slipped into the killer's pocket and the killer not realizing it until he's in the midst of running away on foot, by which point he doesn't even have enough time to fully curse his situation before he's blown to smithereens. The two heroes react to this a shrug, basically, and a crack about having recycled the killer's bomb, ending the film on a comedic note despite the fact that, you know, we just watched a dude get blown up.

Bon Cop, Bad Cop is a film that fully embraces genre conventions (albeit while giving them a distinctly Canadian twist) but also manages to end on a note that subverts convention without making it feel unbalanced. The film has its tongue planted firmly in cheek from the beginning and gradually continues raising the stakes throughout so that it can end on a note that is incredibly violent while still playing it for laughs. Although it's not unheard of for the hero to end up killing the villain, what makes this scene seem unique is the fact that they don't have to kill him. Ususally the villain ends up killed in a straight forward me-or-you scenario; here the villain is running away, posing no immediate threat to the heroes. The way the villain is dispatched should undermine the notion that Ward and Bouchard are heroes, but because the film has done such a meticulous job at sending up (while seeming to play into) genre conventions, the ending instead solidifies their heroic status. The final scenes subverts expectation and opens a new realm of possibility in a very traditional genre.
Posted by Norma Desmond at 8:00 AM