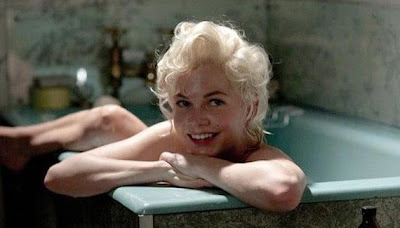 Movies like My Week with Marilyn exist for one reason and one reason only, and that's as a showcase for a performance. All the eggs go into this particular basket and everything else becomes of secondary importance, which leaves little room for error with that central performance. Fortunately, Michelle Williams' turn as Marilyn Monroe is fantastic, the kind that goes beyond "impersonation" and firmly into "inhabitation." However, the caliber of her performance can't disguise how average the film itself is, as it does little to break away from the cliches of its genre, and does even less to offer any new insight into the woman who was, arguably, the greatest film star of all time.

Based on the memoir by Colin Clark, My Week with Marilyn is told from Clark's point-of-view, when he was 23 and got a job as third assistant director on the film that would become The Prince and the Showgirl. Clark is played by Eddie Redmayne, who brings a certain dewy, wide-eyed innocence to the role that makes the character's naivety believable but which also makes his deep insights about the people around him, and their relationships, a bit of a hard sell. At one point he tells Monroe that the problems between her at her co-star/director Laurence Olivier (Kenneth Branagh) stem from the fact that "he's a great actor who wants to be a film star, and [she's] a film star who wants to be a great actor." It's the kind of serviceable observation that wraps things up nicely and comes with the benefit of hindsight; at the time, however, the tensions between the two stars probably did have a bit more to do with Monroe's notorious habit of holding up every production she was a part of, not to mention tensions Olivier would have been experiencing at home due to the fact that his wife, Vivien Leigh (played all too briefly here by Julia Ormond), originated Monroe's role on stage but was deemed "too old" to play the character in the film.

There are many conflicts on the set, from Monroe's nervousness about working with actors of the ability of Olivier and Dame Sybil Thorndike (Judi Dench), to Olivier's feeling of having his authority as director undercut by the presence of Monroe's acting coach, Paula Strasberg (Zoe Wanamaker), and those conflicts put Monroe in the mood for flight. Having decided that Clark is someone she can trust, Monroe embarks with him on a series of small adventures, making him her confidante and, perhaps, considers making him more. However, as Monroe's producing partner, Milton Greene (Dominic Cooper), warns Clark, she has a short attention span with men and he shouldn't count on a happily ever after.

Playing Marilyn Monroe would no doubt be a daunting task for any actress, not simply because she was such a magnetic on-screen force, but also because so much has been written about her that any performance is going to have a huge burden of expectations attached to it. Williams is more than up to the challenge, as she's able to tap into the luminous quality that Monroe had and bring a sense of humanity to the larger-than-life chracter. Although the story imposes limitations on the character in that it views her through the prism of Clark's impressions of her, impressions which rely on the standard, popular view of Monroe (ie, she was insecure, had an almost incapacitating fear of abandonment, and was desperate to be taken seriously), Williams is able to make her real, overcoming the cliches and delivering a performance that is intense, vulnerable, and complex - and she makes it look easy. There is not a whiff of articiality to her performance; it feels just as authentic (albeit in a completely different way) to Williams' masterful performance in last year's Blue Valentine.

Williams' performance is the biggest and best reason to see My Week with Marilyn, but the film itself isn't without merit. Director Simon Curtis unfolds the story at a good pace and mixes the comedic and dramatic elements in an effective way that helps to highlight the way that Monroe's incandescent on-screen quality was usually the result of a Herculean effort off-screen. The film does have a few structural issues (for example, Dench simply disappears for a large part of the film and her presence is definitely missed, as she brings a great deal of charm to her role), but for the most part My Week with Marilyn is soundly made. It isn't a great film by any means but it's a decent one.
Posted by Norma Desmond at 8:00 AM

While I really liked the film. I will agree that it needed more Judi Dench. She was fun to watch and I liked how her character was very supportive and generous towards Marilyn.

wow, i didn't even realize judi dench was in this. good thing you mentioned it. and Michelle Williams is often the best part about her movies. i am interested to see this, for her.