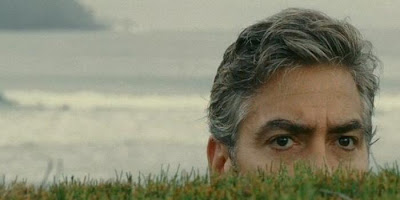 Alexander Payne is an expert at finding comedy in unlikely places. His debut feature, Citizen Ruth, was about the battle over the legality of abortion, About Schmidt was about a recent widower and retiree who fears that life is meaningless and futile, Sideways is about a failed and alcoholic writer, and his masterpiece Election is about the epic battle between a frustrated high school teacher and a manipulative, over-achieving student. His latest, The Descendants is about, amongst other things, the process of grief and like his previous films mixes comedy and drama so seamlessly that he makes it look deceptively easy.

Set in Hawaii, The Descendants juxtaposes its paradisiacal setting with the tragedies - major and minor - of its characters. Its protagonist, Matt King (George Clooney) is a successful attorney and a wealthy descendant of Hawaiian royalty who must decide the fate of thousands of acres of undeveloped land. His wife is in a coma following a boating accident and he struggles to care for their ten-year-old daughter, Scottie (Amara Miller). When he learns that his wife's condition will not improve and that the doctors will be taking her off life support, Matt retrieves their troubled older daughter, Alex (Shailene Woodley), from boarding school, hoping to enlist her help in breaking the news to family and friends. Instead she fills him in on the source of the recent conflict between herself and her mother, namely that she caught her mother having an affair.

Together Matt and Alex learn as much as they can about the man, a real estate agent named Brian Speer (Matthew Lillard), whose connection to Matt runs even deeper than Matt initially suspects. While trying to sort out this increasingly messy situation, Matt also has to deal with his extended family and their competing desires with respect to the fate of the family land. Though the decision ultimately lies with Matt as the sole trustee of the estate, he has agreed to put it to a vote, only to start to have second thoughts about what the "right" thing in such a situation might be. He is also, of course, struggling to come to terms with the fact that his wife is going to die and dealing with the complex emotions of his daughters, as well as his gruff, violence prone father-in-law (Robert Forster).

Payne, who in addition to directing co-wrote the screenplay with Nat Faxon and Jim Rash, can always be counted on to present fully fleshed characters whose conflicts arise in ways that feel natural rather than contrived for the sake of the plot. Matt, for example, has a reason to be angry and bitter and sometimes, in private, gives in to those impulses. In public, however, he masks his pain for the sake of his daughters, specifically Scottie, and to preserve his wife's memory as best he can. When he finally confronts Brian, he is motivated not only by a need to lash out at the one person who can actually answer his questions, but also to allow Brian to the opportunity to have closure. His act is equal parts selfish and selfless and the film never gives short shrift to either side of the situation.

Clooney has long since established himself as an actor of substance, rather than merely a passable talent with matinee idol looks. He consistently makes interesting choices and with Matt, he plays a character who opens up yet another facet of Clooney's abilities as an actor. The role is very different from what you might expect from him and his restrained but effective performance is surrounded by colorful supporting performances, specifically from Woodley and Forster. Both actors take what could be stock characters - for Woodley the bratty teen, for Forster the ornery codger - and manage to give them some substance that helps give depth to the relationships. Though I think The Descendants falls just short of being a great film, it's a very good one indeed, thanks in no small part to the actors and the care with which Payne helps craft their performances.
Posted by Norma Desmond at 8:00 AM