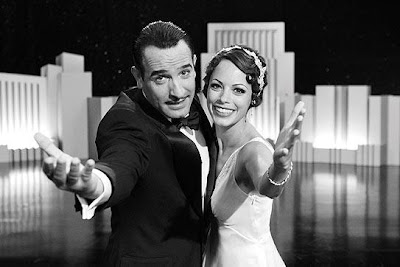 In Preston Sturges' great Sullivan's Travels, the conclusion that the protagonist comes to is that "there's a lot to be said for making people laugh. Did you know that that's all some people have? It isn't much, but it's better than nothing in this cockeyed caravan." Comedy very rarely gets the same level of respect as drama, perhaps because happiness seems somehow like a less profound emotion than sadness, but it takes just as much skill, if not more, to make someone laugh as it does to make them cry. To make a successful comedy requires talent; to make one that feels effortless is nothing short of a miracle. Michael Hazanavicius' The Artist is such a film, and it pulls it off (almost) without saying a word.

Set in Hollywood during the heyday of the silent film era, The Artist is a film that is textually about the movie industry and which is stylistically influenced by silent and classic cinema and by the behind the scenes lore of Golden Age Hollywood. Its protagonist, George Valentin (Jean Dujardin) is a Douglas Fairbanks-esque screen idol whose career is at its height just as sound film becomes ascendant. As the story opens, Valentin's latest film of foreign intrigue has its premiere and he meets Peppy Miller (Berenice Bejo), a fan and aspiring actress who accidentally stumbles into his photo op. Shortly thereafter she manages to get a small role in Valentin's next film, where the attraction between them becomes apparent, and during which time Valentin gives her the idea of penciling a beauty mark on her cheek to give her something to set herself apart from the sea of aspiring actresses around her.

As Peppy works her way through the ranks, building her career and becoming poised for stardom just as sound film is about to change everything, Valentin's life and career begin to fall apart. Believing sound to be a fad that will quickly fade away, Valentin self-finances his next silent film, confident that the audience will stick with him. When the film bombs and the stock market crashes, Valentin loses everything in short order: his wife (Penelope Ann Miller) leaves him, he's forced to auction off his possessions, and he has to let his loyal chauffer (James Cromwell) go. Except for Peppy and his scene stealing dog, he seems to have been forgotten by everyone. Luckily Peppy is now a huge star and is able to strongarm the studio boss (John Goodman) into agreeing to give Valentin a co-starring role in her next film, offering him a chance to make a comeback in a big, splashy musical.

The basic plot of The Artist isn't particularly new - it wasn't even new in 1952 when Singin' In The Rain did it to perfection. What The Artist does is take this well-worn plot and make it seem fresh and even exciting. Although the film could easily have added up to little more than the novelty of its form, writer/director Michael Hazanavicius' complete investment in it elevates it to a level above mere experiment. His direction is so assured and expert that it never feels like an imitation of an old form, but rather like an authentic example of old form filmmaking. The Artist is a film with wonderfully constructed shots, big, busy sets, and dance sequences which occur in unblinking long shots rather than as a mess of quick cuts that chop up the dancer into a series of disembodied parts. Thematically The Artist doesn't run too deep, but it's a work of technical excellence and an absolute joy to watch, particularly in its final scenes. It's been written off by some critics as "fluff," but I wouldn't dismiss it so easily. It's light, but that doesn't mean that it's devoid of meaning or that it's incapable of moving you. It's perhaps not as ambitious as some of the other Best Picture hopefuls of the year, but it's pitch perfect for what it is.

Much of the credit for The Artist's success goes to Hazanavicius as its architect, but credit must also go to its two stars, Dujardin and Bejo. Both actors perfectly fall into the silent acting style, delivering performances so charming and effective that the inherent artificiality of the exaggerated and overly expressive performances demanded by the silent film format never feels distracting. The characters are archetypes, but both Dujardin and Bejo are able to bring strong senses of individuality to Valentin and Peppy, respectively, creating distinct characters rather than allowing them to remain simply "types." The performances exist in harmony with each other and with the world that Hazanavicius has constructed around them, and help make The Artist a great cinematic note on which to end 2011.
Posted by Norma Desmond at 8:00 AM