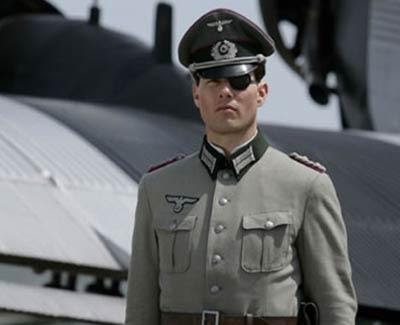 Valkyrie is one of those movies that seems to have had a pall pulled over it before it even got started. Instead of being buzzed about as "the serious movie about the 20 July plot" it was talked about as "the movie where Tom Cruise is an eye-patch wearing Nazi ("Ha" implied)." The very idea of it was met with hostility in Germany, where Scientology is looked upon less than kindly, and everywhere else it had to come up against the fact that over the course of the last decade, Tom Cruise' image has become almost unforgiveably ridiculous. I fully believe that if Valkyrie had come out in 1998 instead of 2008, it would have been a little more warmly received. 'Cause you know what? It's actually not a bad movie.

Cruise stars as Col. Claus von Stauffenberg who, in the film's opening scenes, suffers wounds that cost him an arm and an eye. Prior to this life-altering event, he had already become disenchanted with Hitler and the Nazis, and afterwards he finds himself recruited to join a secret committee to assassinate Hitler, seize power, and end the war. The other members of this cabal include General Olbricht (Bill Nighy), General Beck (Terrence Stamp), and Dr. Goerdeler (Kevin McNally) who, if all goes according to plan, will take Hitler's place as Chancellor.

The group puts together their plan and have two opportunities to pull it off, each ultimately undercut by the group itself. The first attempt takes place on July 15, 1944 and is ultimately scrapped due to the inability of the members of the cabal to agree on whether or not it should go forward (some members only want to go ahead if they can get Hitler and Heinrich Himmler). The second attempt, on July 20th, results in the bomb actually going off but, again, indecision and second-guessing on the parts of individual members of the cabal doom it to failure. No one wants to risk being left holding the bag on something like this, so everyone waits for a sign before doing their part and the result is that everyone ends up being caught.

As a straight-up thriller, Valkyrie works really well. Director Bryan Singer, working from a screenplay by Christopher McQuarrie and Nathan Alexander, is good at building up and maintaining tension and also brings a stylishness to the piece that ultimately serves it quite well. Where Valkyrie falters somewhat is with the history part, not in terms of the facts (as I understand it, the facts as presented in the film are more or less accurate), but in terms of context. The story and characters are stripped of a lot of complexity and nuance, leaving the film feeling like a piece of candy that has a nice shiny shell but nothing on the inside. It works well enough for what it is, but there's really very little depth to it.

In the lead role Cruise renders a serviceable, workmanlike performance. When he stretches himself, Cruise can be an excellent actor (Born on the Fourth of July, Collateral, Magnolia), but here he plays more of a standard issue Cruise hero (well, as standard issue as a hero who also happens to be a Nazi can be) and as a result the performance seems to be informed more by "Tom Cruise the movie star" than "Tom Cruise the actor." The performance isn't at all bad, it just isn't particularly special, which is how I would describe Valkyrie as a whole. It's a fine film, but nowhere near greatness.
Posted by Norma Desmond at 8:00 AM

It may not be great but it is the best look at the 20th July plot made so far. I liked Cruise and felt for once he put way his ego for the role. Maybe the Germans instead of rubbishing Cruise over his beliefs should have made a film about the plot as with Downfall. They didn't so take it they should take it for what it is.
This did get somewhat bagged by the critics but I think it a fine film on an important period of history. It is certainly the period of history I have studied most about in my lifetime. I think this outing done a fair job of portraying the tensions and events of the time in an unusual Hollywood way of for once sticking to the facts and not embellishing them to make a storylie more spectacular or sympathyic to one or other party.

Great review. I was pleasantly surprised with how good this movie was. One of Cruise's better films in recent years, for sure.