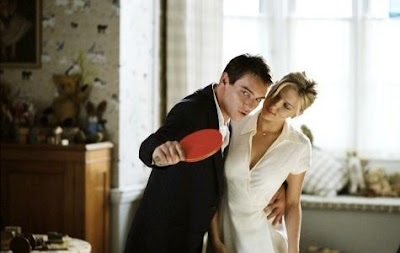 "You have to learn to push the guilt under the rug and move on, otherwise it overwhelms you." Match Point is a meditation on morality, an examination of how far a person might go in an effort at self-preservation. It has the strange distinction of being the Woody Allen film most unlike other Woody Allen films, while at the same time borrowing quite heavily from one of his most celebrated films (Crimes and Misdemeanors). At the time of its release Allen called it his best film - I think that's an epic overstatement, though a case could definitely be made that it's his best movie of the last ten years.

Match Point proceeds from the point of view of Chris Wilton (Jonathan Rhys Meyers), a tennis pro with aspirations of social mobility. He gets his chance when he takes on a new pupil, Tom Hewett (Matthew Goode), who takes a shine to him and invites him to join his family at the opera. There Chris catches the eye of Tom's sister Chloe (Emily Morton) and soon he's being groomed to join the family, which includes being given a job at "one of" the companies owned by the Hewett patriarch. Chris doesn't so much climb the social ladder as charm the Hewetts into wanting to pull him up; everything he has ever wanted is essentially handed to him on a silver platter and all he has to do is reach out and take it. It would all be so easy, were it not for his self-destructive streak.

As Chris is just starting to maneuver his way into the Hewett family, Tom's fiancée, Nola (Scarlett Johansson), is already entrenched, albeit uneasily. Tom's mother hates her and Tom, despite his early protestations, is ultimately interested in maintaining the social status quo, which eventually leads to him breaking up with her. Nola disappears for a while, during which time Chris and Chloe marry, but when she reappears Chris can't stay away and they begin an affair which threatens to unravel Chris' now very comfortable life.

Match Point is a very dark film, which is one of the reasons why it stands out in such sharp relief from Allen's other films. He has, of course, made other dramas but even those films had touches of his trademark comedy. Match Point, though clever, is pure drama. In many of his films, the characters can hide behind their various ticks and neuroses, but here he lays the characters completely bare, focusing on the nakedness of their desires and ambitions. Chris wants to rise in the world; Chloe wants a picture perfect husband to complete her picture perfect life, even if she has to buy him; Tom wants to sow oats and then settle down with exactly the kind of woman his parents would approve of. Nola's ambition isn't quite as clear. Though her stated ambition is to be a successful actress, at times she seems rather ambivalent about it. What she really seems to want is, simply, to be wanted, wanted in the long-term, to be the star of a personal drama if nothing else. There is an intense vulnerability to the characters because their desires are so out in the open but, at the same time, there is a ruthlessness and a hardness to them that keeps us from truly warming to any of them. Allen strikes exactly the right balance in portraying these characters and it's fascinating to watch them weave around each other, their relationships subtly shifting as everyone recalibrates their respective game.

Match Point has a great many strengths and is, on the whole, a very good film. It's not perfect and there are two shortcomings in particular which stood out for me. One is Johansson's rather flat performance, the other is the ease with which things resolve in Chris' favour. The deus ex machina notwithstanding, I find it difficult to believe that someone acting as guilty as Chris does at the end would be able to snow the police so effectively. If you ever want to know what not to say and how not to act when being questioned by the police, watch the end of this movie. Still, even though there are some chinks in the armour at the end, Match Point is a really good movie and proof positive that Allen still has some spark as a filmmaker.
Posted by Norma Desmond at 8:00 AM

I liked this film though I do agree with you that it's kind of overrated. I admit, I thought it was a more dramatic version of Crimes & Misdemeanors though it did have a fine cast.

I did like Johansson's performance for about half of the film. By the second half, she gets very dramatic and I pretty much found myself annoyed.

I was a fan of hers but this is when I started to get tune out and get interested in other actors and actresses. Anyways, great review.

Norma, an excellent post. I agree fully that this is the least Woody Allen-like of Allen's films and also that it's his best film of recent years (I would say since "Crimes and Misdemeanors"). I certainly liked Johanssen in "Girl with a Pearl Earring" and especially "Lost in Translation" but found that her increasingly shrill performance grew tiresome by the end of this movie. Interestingly, in "Vicky Christina Barcelona" it was Rebecca Hall and not Johanssen that I wanted to see more of. I've never completely decided how I feel about that ending. I can see that Allen was trying to say that sometimes the most important things in life are really just the result of chance, yet it does seem quite arbitrary. Also the coldness of the film towards Johanssen and the neighbor who must die to make the crime look convincing left me uneasy. As for Allen's own assessment of this film, I recall reading that he thought some of the films most people consider his best (like "Manhattan") were overrated, so maybe like a lot of artists he's not the most dispassionate judge of his own work.

@thevoid99: Johansson's performance didn't really do it for me at any point. I thought she was okay in Vicky Cristina Barcelona but just didn't respond to her here.

@R.D. Finch: I totally agree with you about Rebecca Hall. She was the secret star of Vicky Cristina Barcelona.

As for Allen's opinion of his own work, I have read that he's not a fan of his more celebrated works. Crazy!