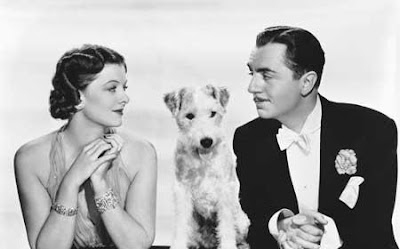 The Thin Man is the kind of movie people mean when they say, "They don't make them like that anymore" (though that may not remain true, as a remake is in the works). A witty comedy/mystery, The Thin Man is one of the best films to come out of the 1930s (and that's no faint praise) and features one of the greatest film pairings of all time.

Though the mystery element of the story is ultimately secondary to the comedic aspect, it's nevertheless very well put together. The screenplay by Albert Hackett and Frances Goodrich (adapted from the novel by Dashiell Hammett) very efficiently and effectively establishes the context of the crimes, the motivations of the suspects, and the relationships between the suspects and the victim. In the film's climactic scene all of those people and their dirty laundry are brought together in drawing room fashion as Nick lays everything out and then casually reveals the identity of the killer.

The great joy of The Thin Man (this film in particular but the series as a whole) is watching Powell and Loy work together. There is a relaxed, lived-in feeling to their relationship. They tease each other a lot but it's never mean spirited; there is a great deal of affection in the way that they relate to each other (though I imagine that the remake will not include the part where he punches her in the face). They're a perfect team in that they're supportive of each other and have similiar sensibilities. Both actors inhabit their characters with such grace that they seem to have been born to play them and sometimes (such as when Van Dyke focuses on Powell's reaction to Loy's double entendres) it seems like the line between character and actor has been erased entirely.

The Thin Man is the perfect movie to watch if you're in a bad mood because it's lightness and wit will immediately lift your mood. It's also a perfect movie to watch if you're already in a good mood simply because its so well made in absolutely every respect. This is an absolute joy of a movie. If you haven't had the pleasure yet, make some time to see it. You definitely won't regret it.
Posted by Norma Desmond at 8:00 AM

Hey Norma Desmond :) ...would you consider exchanging links? I would add you to my recent posts blog roll.

Let me know if you're interested, I've enjoyed your reviews of classic movies. And yeah, The Thin Man is a perfect film, great review!

Oh, in case you don't want to go through my Profile, here's my direct url: