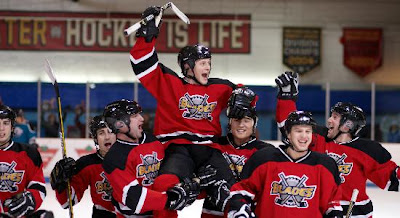 Score: A Hockey Musical represents the big conundrum of Canadian cinema. It is said that the reason Canadians don't have more opportunity to see Canadian films is that when Canadian films are released, audiences don't go to see them. Score had what most Canadian films lack in that it was heavily promoted and had a really wide release. The problem? The promotion for it made it look unforgiveably cheesy, an amalgamation of what we would imagine people outside of Canada assume that Canadian film is all about, and audiences stayed away. Having now seen the film, I have to say that while it is a bit cheesy, it's also very enjoyable and less unfathomably earnest than the trailers made it seem and I have to assume that its failure is not a failure of Canadian cinema or Canadian audiences, but a failure of marketers to understand the audience.

Score centers on Farley Gordon (Noah Reid), a home-schooled teenager with a gift for playing hockey. He's never played in an organized league or on a team of any kind (he's purely a street hockey player), but after he's spotted by Walt Acorn (Stephen McHattie), the owner of a minor league team, he finds himself being pursued to join a team. His parents (Olivia Newton-John and Marc Jordan) are reluctant to let him participate but Farley, with some backup from his best friend, Eve (Allie MacDonald), is able to make a case that they ought to at least let him try it.

Farley joins the team and soon attracts a lot of media attention. He gets an agent and endorsements and a shot at the NHL - until everyone discovers his refusal to fight. His teammates see his pacifism as a refusal to fight for the honor of the team, while fans see it as an unmasculine trait. This leads to an image problem that severely undercuts his potential as a professional player. Meanwhile, his success has already started to go to his head, damaging his relationships with his parents and with Eve, with whom he has realized that he's in love but who may have already cut her losses and moved on with an Italian musician.

Score is a very light-hearted movie but I think that its exploration of Farley's divided self is actually fairly solid. He's been sheltered and fairly isolated his whole life and he likes the cameraderie that comes along with belonging to a team. When his teammates turn their backs on him because of his stance on fighting, it leaves him feeling very lonely. At that same time, his pacifism is a strongly held belief and when he attempts to shut that part of himself off, he ends up feeling guilty and ashamed of his behavior. The characterization of Farley is strong and the film does an excellent job at articulating his dilema so that we actually care about how he resolves it.

As far as the music goes, I didn't feel like it was perfectly incorporated into the story itself, but I didn't think that it distracted from the film's larger themes either. The singing, for the most part, isn't great - there's a lot of "talk singing" - but the movie has a good heart and it's hard to hate on it. Is it a classic of Canadian cinema? No, but it's better than its reputation.
Posted by Norma Desmond at 8:00 AM