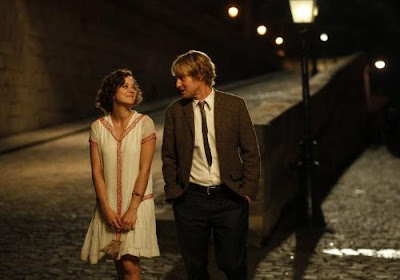 These days, when Woody Allen is off, he tends to be way off. Fortunately, every once in a while, he's capable of being right on target and it's the fact that for every couple of clunkers there's a Vicky Cristina Barcelona or a Match Point that keeps us coming back. Midnight in Paris is one of his winners, a charming, magic realist comedy that just might be his best film since 1999's Sweet and Lowdown.

Owen Wilson takes the lead, starring as Gil, a screenwriter with aspirations to become a novelist. While he quickly falls in love with Paris (and, more specifically, with the idea of the Paris literary scene of the 1920s) and begins talking about moving there, his fiancée, Inez (Rachel McAdams) can't wait to get back to the states, an attitude she shares with her parents, who epitomize the image of the "ugly Americans." Also in Paris are Inez's insufferable, know-it-all friend Paul (Michael Sheen) and his wife, whom Gil is desperate to escape. One night while Inez goes dancing with her friends, Gil goes out to walk the streets and soak in the atmosphere, discovering in the process that something magical happens when the clock strikes twelve.

Gil goes back to the 1920s, where he meets Scott and Zelda Fitzgerald (Tom Hiddleston and Alison Pill), Ernest Hemingway (Corey Stoll), Pablo Picasso (Marcial Di Fonzo Bo), Gertrude Stein (Kathy Bates), and Salvador Dali (Adrien Brody), amongst others. He also meets Adriana (Marion Cotillard), who is the lover of Picasso and then Hemingway, but who falls in love with Gil. Though Gil is completely enchanted with her, and with the world into which he's continually able to escape, he eventually comes to realize that he's can't live in the past, no matter how beautiful it may be.

Midnight In Paris unfolds with an expertly light touch. There's no attempt to explain the mechanics of Gil's time travel; instead the film just sort of goes with it, accepting it at face value. Given this strategy, Wilson is pretty much the perfect actor for the role because he has such an easy going, take it as it is screen persona. He's not without his neuroses (he couldn't be a Woody Allen character without being a little neurotic) but he isn't defined by them either. He makes for a very likeable hero, which is good in and of itself but which also highlights one of the film's flaws. Which brings me to...

Inez. Inez. How did these two ever get together in the first place? you'll ask yourself over and over during this movie. She doesn't even like him! She barely tolerates his presence! McAdams is a great actress, but the character doesn't really give her much to do, which is a real shame since Allen actually has a really solid track record with respect to female characters. Cotillard fares a bit better, though Adriana is really just is a mirror to reflect Gil's own desires and, ultimately, show him the error of his thinking.

Minor issues aside (and I would include the sometimes inelegant way that Allen makes sure we know that Gil is in the presence of "a great artist from the past" as one of the film's flaws), Midnight In Paris is an incredibly enjoyable film. It reminded me quite a bit of one of my favourite Allen films, The Purple Rose of Cairo, though this ends up being a much less profound and weighty venture. The conflict in the earlier film arose from the protagonist having to chose between something perfect but fake and something flawed but real; here Gil must realize that there is no such thing as a "perfect" present, that the passage of time will always make the past seem more romantic, and learn to live in the moment that "is" rather than the moment that "was." It's actually a really beautiful sentiment as Gil puzzles it out for himself and one of the things that helps make Midnight In Paris such a gem of a film.
Posted by Norma Desmond at 8:00 AM

I really, really want to see this! It won't be out here for months though :(

It seems to be doing really well at the box office - hopefully that means they'll be expanding to more theaters soon.

Allen has a love for the city of Paris and I could tell, but what I really liked was the performance of Owen Wilson, who proves he really is funny. He just needs the right material to show it off again. Good Review!

Way late to the party here, but stumbled onto your site and wanted to say hello.

I recently saw this with my wife and I really loved it. You are clearly more versed in Allen films than I.

I liked the bit about a weakness of the film - the HEY LOOK! important person from the past! awkwardness. That's a good call.

Too bad I'm so ignorant to that time period I needed that very badly!