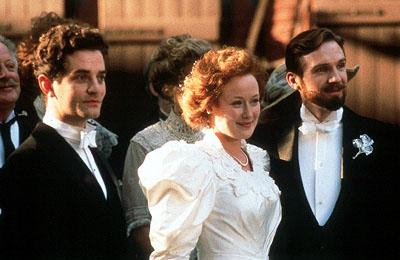 Istvan Szabo's Sunshine, a sprawling and handsomely produced story about anti-Semitism in Hungary, comes so very close to being great that it's a shame when you get to the end and realize that it will have to settle for merely being good. It's a beautiful looking and often moving film, but it seems to run out of things to say before it's entirely finished saying them.

Sunshine is a family epic that focuses on three generations of men (all played by Ralph Fiennes) forced to confront anti-Semitism in three distinct political contexts within Hungary. The first story takes place during the tail end of the Austro-Hungarian Empire and centres on Ignatz Sonnenschein, the eldest son of a successful Jewish distiller. Though the family fortune has been made on a secret tonic recipe that has been passed down for generations, neither Ignatz nor his brother, Gustave (James Frain), have any interest in joining the family business, perfering instead to enter into the fields of law and medicine, respectively. Their father takes this news well enough, though he's somewhat taken aback when his sons decide to change their name to the more Hungarian sounding "Sors" in order to facilitate their rises in their respective fields. When Ignatz later announces his intention to marry his cousin, Valerie (Jennifer Ehle), the division between the generations become even more pronounced as his parents (particularly his mother) do not approve. As time goes on, Ignatz and Gustave find themselves divided from each other over their political positions (Ignatz is a firm monarchist while Gustave is a Communist), a rift which eventually carries over into Ignatz's marriage as Valerie comes to believe that he's no longer the idealistic man she fell in love with.

The second story focuses on Ignatz and Valerie's younger son, Adam, who comes of age after the collapse of the monarchy and becomes a celebrated, Olympic gold medal winning fencer. Although he and his brother, Istvan (Mark Strong), both convert to Catholocism in an effort to further integrate into Hungarian society (now deeply in the thrall of Facism), both are eventually murdered by the Nazi regime, Adam in a particularly brutal way that is all the more horrific because it is based on the death of Attila Petschauer, a real-life Hungarian fencer. Adam's death haunts his son, Ivan, who emerges from the concentration camp and into the now Soviet controlled Hungary where he is given a job investigating and bringing to justice fascist collaborators. Though he is passionate about his work, he eventually becomes disillusioned by it when it becomes apparent that the Communists have constructed a means of using Jews as scapegoats. He is heartbroken at this realization and in his attempts to fight against it, he ends up in prison, where his grandmother (now played by Rosemarie Harris), attempts to reassure him: "I have seen the collapse of government after government and they all think they can last a thousand years. Each new one always declares the last one criminal and corrupt, and always promises a future of justice and freedom... You are not in prison, they are."

There are two ideas at the heart of Sunshine. The first is that while the Nazis took anti-Semitism to the furthest possible extreme, it was not a concept that they introduced into Hungary (or any other part of the world). It had always been there, quieter perhaps even dormant, but it already had roots before the Fascists came to power, which is how they were able to consolidate that power so effectively. The second idea is that assimilation is not the answer. The first two generations made compromises, first by changing their name and second by changing their religion, but in the end found that people determined to hate them would continue to hate them regardless. Assimilation only introduced an element of self-hatred into their lives (one that is particularly pronounced with Adam) and, worse still, gave them a false sense of security, a feeling of finally belonging amongst people who would always set them apart. As the film ends, Ivan has changed his name back to Sonnenschein and, for the first time in his life, feels free. He's no longer hiding and suffering from feelings of shame; he's proud and feels that he can face the world head-on.

Sunshine tells a massive story (I've really only revealed the plot in broadstrokes and left out tons of plot threads, developments, and characters) and, for the most part, tells it quite well. The first two segments concerning Ignatz and Adam are engaging and often thought provoking, however the film runs out of steam in the midst of the third and final story. Fiennes is terrific as all three characters, making each distinct from the others, but Ivan never really feels as compelling as his forebears and so the film ends on a somewhat weak note. All things considered, Sunshine is a really good film, it just doesn't quite measure up to its lofty ambitions.
Posted by Norma Desmond at 8:00 AM