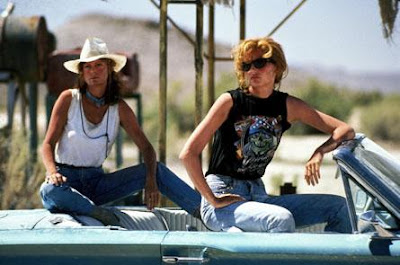 It's weird, isn't it, the way that a movie can be released, make a big impact, fade away, and then come roaring back into the zeitgeist? 2011 marks the 20th anniversary of Thelma and Louise and during the past couple of months the film seems to keep coming up, in magazines (Vanity Fair had an article about it a couple months back), online, and lo and behold, it was on TV over the weekend. 20 years later it still holds up really well - though it's bizarre, from a 2011 standpoint, to see Brad Pitt get seventh billing and behind Stephen Tobolowsky to boot.

Thelma and Louise is the story of a weekend get away gone awry. All the eponymous characters really want is a couple days of escape from their unhappy lives - Louise (Susan Sarandon) is a waitress coming to terms with the fact that her musician boyfriend is never going to settle down; Thelma (Geena Davis) is a housewife whose husband treats her like a nuisance and an idiot - and instead they end up on the run, on a crash course towards oblivion. It all goes wrong when they stop at a bar, where Thelma gets drunk and spends the night dancing with a guy who then attempts to rape her in the parking lot, and Louise ends up shooting and killing him. They take off and, after a little back and forth, decide to make a break for Mexico.

Between the shooting and that famous final shot that seals their fate, Thelma and Louise have a few adventures, the most significant of which involves a drifter and ex-con named J.D. (Brad Pitt), who gives Thelma a lesson in how to conduct a hold-up but also sneaks off with all the cash Louise has gotten from her sometime boyfriend, Jimmy (Michael Madsen). Meanwhile, a manhunt is underway for the two women led by a detective named Hal Slocum (Harvey Keitel), who wants desperately to keep a bad situation from getting any worse.

Thelma and Louise is a film that inevitably seems to come up in discussions of feminism and film and, though I think that it ultimately is a feminist film, I also think that it has a somewhat uneasy relationship with feminism. It touches on the way that culture stacks the deck against women - Louise's reasoning for running is that no one would believe that Harlan tried to rape Thelma since so many people saw her dancing with him, but that even if people did believe that he forced himself on her, they would also believe that she was "asking for it" (which may sound ludicrous in 2011, but consider the fact that even now anti-rape PSA almost always focus on what women can do to avoid situations where they might be raped rather than focusing on telling men to, you know, not rape) - but its embrace of revenge and violence (and "embrace" is the only word since, towards the end of the film, Thelma states that she's finally started to have fun) is problematic and several of its examples of misogyny are straw man targets. The would-be rapist Harlan, Thelma's husband Darryl (Christopher McDonald), the truck driver who encounters the women frequently on their journey, these are all very simple, starkly drawn villains and the forms of misogyny that they represent and perpetuate are extreme - not unrealistic, mind you, just extreme, obvious examples.

But, of course, Thelma and Louise is a film built on a growing sense of the extreme, a fact which is pretty well confirmed by the time the two women blow up the truck driver's rig. There's a sense of urgency to the film which is perhaps why it relies on some of its broader strokes. These touches are balanced out by the more nuanced portrayals - of both Thelma and Louise, but also of Slocum, whose very positive depiction belies the notion that this is somehow a blanket "anti-male" movie - and by director Ridley Scott's very assured and expert direction. This is a film that could very easily go over the edge into parody but always manages to pull itself back and keep itself grounded in the real.

Sarandon and Davis, both of whom received Oscar nominations (Jodie Foster won that year for The Silence of the Lambs), are excellent, matching each other strength for strength. They make their characters all too human and their interactions suggests the depths and intricacies of their friendship. The characters and the performances work on the symbolic/iconic level but also on a more realistic, personal level which I think is why the film still holds up so well. The cinematography makes Thelma and Louise look a bit dated, but on the whole this is a timeless film.
Posted by Norma Desmond at 8:00 AM