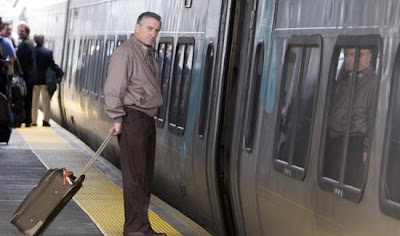 To answer the question you haven't actually asked yet: yes, Everybody's Fine is as bland as its title. It's not a good movie, it's not a bad movie, it's just sort of there, inoffensive and somewhat uncertain as to what sort of movie it wants to be. It isn't without its redeeming features, but it's a wildly uneven effort.

Robert De Niro stars as Frank, a recently widowed man preparing for a visit from his four children. As the day goes on and he continues getting the house ready, however, one by one the kids phone with an excuse as to why they won't be able to make it after all (one of the sons doesn't actually call at all; it's one of his sisters who sends his regrets). Full of anxiety as he realizes that it was his wife who kept the family together, Frank decides to try to forge connections with his children by going to visit each of them.

His first stop is New York, where his son David makes his living as an artist. However, David never shows up at his apartment and Frank moves on to Chicago, where his daughter, Amy (Kate Beckinsale) lives with her husband and son and works as an ad exec. After that it's on to Denver, where he's shocked to find out that his son, Robert (Sam Rockwell), is not actually a symphony conductor but simply plays in the percussion section. Finally, he goes to Las Vegas where his daughter, Rosie (Drew Barrymore), works as a dancer. At every visit he discovers something his children have been keeping from him - Robert's job, Amy's impending divorce, Rosie's baby (!) - and, behind his back, his children keep in constant contact with each other, trying to figure out ways to keep shuffling him around so that he doesn't find out that David is missing in Mexico.

Written and directed by Kirk Jones (Waking Ned Devine, Nanny McPhee), Everybody's Fine is continuously alternating between whether it wants to be a gentle comedy or a profound family drama. I actually think it would have been pretty successful if it had stuck to the comedic tone. The film has a bit of fun with Frank being, well, old and doing "old people" things. For example, when he's out sightseeing he asks someone to take a picture of him and the guy is baffled at being handed Frank's non-digital camera. Another example is when he visits Amy and his grandson takes his suitcase, immediately pulling out the handle, which Frank previously had no idea existed. Jones allows these little touches to happen in a way that feels natural and feels no need to hit you over the head with them, which is nice.

Unfortunately, when it comes to the more dramatic moments, the film gets incredibly heavy handed. If Everybody's Fine was consistently a drama and slowly built momentum towards its climactic scenes it might work, but the film swings back and forth so fast between tones you're liable to get whiplash. The actors are all fine, though the problems with respect to tone also make it somewhat difficult for them to really develop their characters. In the end, Everybody's Fine has a few good moments but really isn't a movie worth going out of your way to see.
Posted by Norma Desmond at 8:00 AM