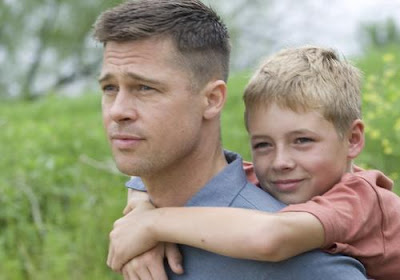 Whatever else you can say about Terrence Malick, you certainly can't accuse him of compromising his artistic vision for the sake of making his work more commerically viable or more easily accessible. His latest film, the long-delayed The Tree of Life, is an almost defiantly personal film that seems to have been designed to be as divisive as possible. I liked it, I know a lot of people didn't; I think this is a film that is destined to inspire a lot of strong feelings (good and bad).

At its core, I suppose The Tree of Life can be summed up as a meditation on the nature of life and death. Its message - "Life goes on" - is stated early in the film in scenes which focus on the small-scale, personal drama of the O'Brien family as they mourn a death. Death plays a key role in the film, though it is less the sadness of death that defines it than the miracle of having lived to begin with. Malick reaches back from the main story, back to the very beginning of time, showing the universe and the earth's creation, the primordial beginnings, the dinosaurs (and their end), the various changes and stages of the earth's history. What the film seems to be asking is with all that has existed and ceased to exist, how can the death of one person be seen as a tragedy? So much has happened, so much has yet to happen. Just try to enjoy it and appreciate it while you can.

Most of the film focuses on the O'Brien family in the 1950s, living in Waco, Texas. Eldest son, Jack (played as a child by Hunter McCracken and as an adult by Sean Penn) is on the verge of adolescence, his relationships with his parents (Brad Pitt and Jessica Chastain) becoming increasingly complex. Where his father is concerned, Jack is often torn between his need to assert himself against his father's dominance and his ultimate respect for the man. With his mother, he's drawn to her gentleness but he also feels ashamed of his inability to live up to her goodness (which is of course tied to his need to reject gentleness in order to develop the hard shell which will allow him to stand up to his father). The relationships within the family are sometimes difficult - at one point Jack secretly wishes his father dead, at another he rejoices in the fact that his father has left on an extended trip - but are never presented in black and white terms. The father is harsh (too harsh, at times), but Malick draws him clearly enough that his ambitions and disappointments add an extra layer to his behavior, making it easier for us to understand him and believe that he is not malicious just intensely frustrated.

Malick's films can never really be said to be showcases for actors since his narrative strategies often disrupt the natural flow of individual performances and his characters tend to be secondary to whatever overarching theme they happen to be serving. That being said, Pitt's performance as Mr. O'Brien is excellent, charting his progress from a man striving to become "important" and leave some kind of permanent legacy to a man broken by failure, forced to accept that he's just a man like any other. Chastain does not fare quite as well as Mrs. O'Brien, not because her performance isn't good, but because the character is seen in almost sainted terms, which leaves her seeming rather flat. McCracken, making his film debut, is a real find and Malick draws a performance out of him that goes a long way to establishing Jack's complicated feelings during the key period of his life.

Malick has never been a conventional filmmaker but even by his own standards, this is a very narratively loose, dreamy endeavour. It's a film made up more of images and moments than a proper story, and while it will seem riveting to some, to others it will seem ponderous and deadly slow. Although I think it's a little bit flawed (it definitely begins to drag at the end), I also think that it's a masterpiece. The breathtakingly beautiful creation sequence alone is worth the price of admission.
Posted by Norma Desmond at 8:00 AM

Most people seem to think it's a master piece though it also drags a bit. I haven't seen it so I can't really say, but from all the raving reviews and the gorgeous trailer, I'm looking forward to seeing it! Nicely written review