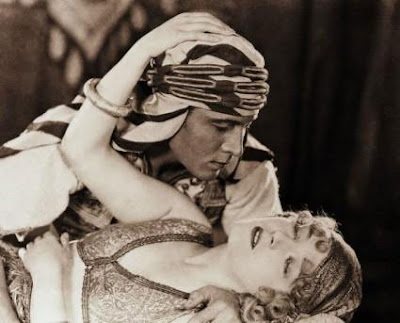 You know, it’s a real shame that films today aren’t as morally sound and wholesome as they used to be. Whatever happened to the days when a star’s status as a romantic lead could be made by starring in a film where his character kidnaps and rapes someone, and that status could be solidified by starring in the sequel where his character kidnaps and rapes someone? Ah, the good old days!

To start with The Sheik, Rudolph Valentino stars as Sheik Ahmed Ben Hassan, a powerful and respected man whose mysterious/exotic aura attracts the attention of English adventuress Lady Diana Mayo (Agnes Ayres). Diana is intrigued by the Sheik and his ways, but she’s far less interested in him than in following through with her plan to trek across the desert, an adventure she intends to undertake only in the company of an Arab guide and without the protection of a fellow Brit, which scandalizes the local society. The Sheik has other plans, however, and rides out with a posse to pluck her off course and bring her back to his camp. She warns him that people will be looking for her, but he confidently informs her that by the time anyone knows she’s gone it will be too late.

Though she makes an attempt at escape, Diana ultimately remains at the Sheik’s camp and finds her humiliation deepened by the arrival of the Sheik’s friend, Raoul (Adolphe Menjou). The Frenchman is sympathetic to Diana’s plight and pleads with the Sheik for her freedom, to no avail. His efforts, however, earns him Diana’s friendship which quickly leads to the Sheik becoming jealous. But by this point Diana has fallen in love with the Sheik and taken to lovingly writing his name in the desert sands. Everything would be perfect were it not for the fact that she’s about to be kidnapped from her kidnapper.

The sequel, Son of the Sheik, which finds Valentino reprising his role as the Sheik as well as playing the son of the Sheik, who is also named Ahmed, follows a somewhat similar plotline. Young Ahmed has fallen in love with Yasmin (Vilma Banky), a dancing girl who is essentially being used as bait to lure Ahmed into a trap so that he can be ransomed back to his father. Ahmed becomes convinced that Yasmin knowingly played him and in retaliation he kidnaps and rapes her, though by the story’s end all is well between them. Meanwhile, the Sheik and Lady Diana (played once again by Ayres) also make an appearance in which he expresses his irritation at his impulsive and rebellious son, and she lovingly reminds him that Ahmed is just taking a page out of his father’s playbook.

Obviously there are some very problematic things about these two films. Aside from violence against women, The Sheik also boasts a fair bit of racism stemming from its portrayal of the Sheik. He’s at once depicted as having this wild, untameable sexuality but also as being more “evolved” than his followers because he was educated in France. Further, the hot blooded, highly sexualized and brutal version eventually gives way to a kinder, gentler Sheik at which point we learn that he’s not an Arab at all, but the son of an Englishman and a Spanish woman. To say that the film is an ideological mess is a bit of an understatement.

As far as the skill demonstrated in the films, The Sheik is a bit shapeless and somewhat plodding, Valentino’s performance a bit broad. Son of the Sheik is the superior film, one that is better paced and more focused. It is also much lighter in tone – despite the sadomasochism involved in Ahmed’s brief period of captivity and the rape scene (implied not shown, of course) – with plenty of comic relief in the form of Ahmed’s would be captors, some of whom are surprisingly inept. Valentino’s performance, too, is better in the sequel, more controlled and nuanced in comparison to his first turn as the Sheik. I don’t know that these facts are enough to make Son of the Sheik a truly good film, but it’s certainly one worth seeing to anyone with an interest in film history.