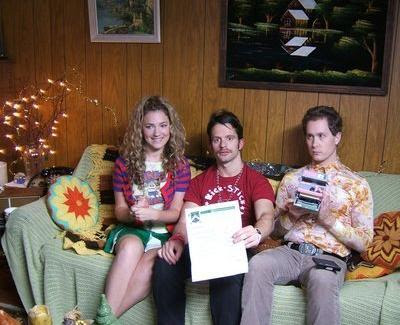 You don't expect much from a movie called Rock, Paper, Scissors so it's hard to say that the end result leaves you disappointed. The movie didn't disappoint me as much as it just didn't speak to me, although it's not without its moments. Certainly it makes me curious to see what Tim Doiron and April Mullen do next, as they demonstrate a lot of potential here.

Rock, Paper Scissors: The Way of the Tosser is constructed in the style made popular by the films of Christopher Guest, as a documentary about absurd people doing ridiculous things with utter sincerity. Its subject is Gary Brewer (Tim Doiron), a champion rock, paper, scissors player in training for the world championship. He lives with his girlfriend Holly Brewer (April Mullen) - "no relation... yet" - and Trevor (Ryan Tilley), an amnesiac who plays with dolls and is being haunted by the ghost of Gary's dog, killed in a rock, paper, scissors related car accident which has prompted Gary to take a vow never to throw paper. This, of course, puts him at a distinct disadvantage, as his mentor Finnegan O'Reilly (Mairtin O'Carrigan), points out time and again.

Gary's rival is the obnoxious Baxter Pound (Peter Pasyk) who, in addition to being a preening blowhard, has designs on Holly and tries to "win" her in a rock, paper, scissors throw down with Gary. Most of the story concerns Gary's training for the championship and the aftermath. Very little time is spent on the championship itself, which is surprising in that that's usually the showpiece of stories in the sports genre, but, on the other hand, it's not so surprising given how rivet ting it is to watch two people play rock, paper, scissors.

Rock, Paper, Scissors is told with a very broad kind of humor that occasionally touches on more subtle notes. It reminded me a bit of Mike Judge's 2006 film Idiocracy in that both films tend to go for the easiest possible joke nine times out of ten and then that tenth time they give you something disarmingly clever. It's a pretty goofy movie and so are the performances, but with characters so thinly drawn you don't really need a performance that delves deep. The standout of the cast is Tilley as blank slate Trevor, who gets some of the film's best lines and has marvellous delivery.

This film marks the directorial debut of Doiron and Mullen and it shows. The story is kind of shapeless and meanders for a long time before it really starts to feel focused. Individual pieces of it work but it doesn't quite feel cohesive as a whole. Like I said at the beginning, though, it does demonstrate some potential and it will be interesting to see how the pair's next film, Gravytrain (which Mullen will direct solo from a script by Doiron, according to IMDB), turns out.