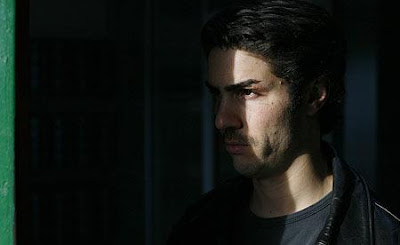 Jacques Audiard’s A Prophet is the kind of film for which the term “gritty” was invented. Intense and often harrowing, it’s a film that is deeply critical of the criminal justice system and explores this theme without sacrificing the narrative for the sake of the message. It is a finely wrought film that more than lives up to all of the praise it has already received.

The story centres on Malik (Tahar Rahim), an illiterate young man with no ties about to start a five year prison term. He’s been in trouble before but, as his lawyer explains, since he’s now considered adult, the punishment will be more severe than what he experienced before. Once inside, Malik finds himself isolated by the inability of the other prisoners to define him in any one simple term. He’s of Middle Eastern descent, which makes the white prisoners wary of him, and he isn’t Muslim, which makes the sizeable Muslim population mistrustful of him. He’s in a particularly vulnerable position and the perfect target for Cesar (Niels Arestrup), a Corsican mobster, whose ties to the outside make him the most powerful man amongst the prisoners and also allow him a fair degree of leverage against some of the prison staff. He needs to get rid of Ryad (Adel Bencherif), an informant being kept in custody while he waits to testify in court. Cesar can’t afford to get his own, or any of the other Corsicans, hands dirty so he blackmails Malik into agreeing to take out Ryad, giving him the choice between taking a life or losing his own. Malik insists that he’s not a killer and tries to find a way out of it, but his fate is ultimately sealed.

Murdering Ryad is the first of many steps that Malik will take towards becoming a very dangerous and very powerful man. Far from being a deterrent, prison instead makes Malik a more skilled and well-connected criminal, turning him from a kid committing petty, non-violent crimes to a man capable of startling violence and Machiavellian machinations. The rootlessness that once made him a target becomes his greatest asset, allowing him to weave himself in with a variety of factions, creating a network of diverse alliances that make his growing crime syndicate increasingly unstoppable.

Although Malik is characterized in the beginning by a kind of innocence regarding the way things and people work, he becomes increasingly sophisticated in his ability to network. He plays the part of Cesar’s submissive pawn so well that Cesar is blinded to the fact that he's on the verge of going the way of his namesake and about to be usurped by his whipping boy. This section of the story is where Rahim really excels as Malik because he's able to convey to the audience how much Malik has learned while simultaneously being able to mask it from Cesar. He subtly and successfully charts Malik's maturation from frightened and impulsive kid to cool headed adult able to think three moves ahead.

The story is constructed in such a way that it essentially unfolds in chapter form. Although this breaks up the narrative, it also provides it with a nice sense of flow, as there are several different plot strands which must ultimately be woven together. Audiard infuses the film with strong energy and a vibrancy that contrasts nicely with the deeply dark nature of the story and he guides the narrative in directions that are sometimes suprising. I particularly liked the device of having Ryad continue to appear throughout the film as a ghost and an indication of Malik's mental/spiritual state at any given time. His initial hositlity towards the spirit - signifying his knowledge that he's done something that can never be undone and that he'll have to carry around forever - eventually gives way to a kind of comfort; he becomes used to this otherworldly presence just as he becomes used to his growing power. This is just one of the many threads that Audiard pulls together to give us a picture of Malik's psyche and his narrative strategy works very well. Combine that with the strong visual aesthetic that he brings to the table and you end up with a film that just keeps rising in your estimation the more you think about it afterward.