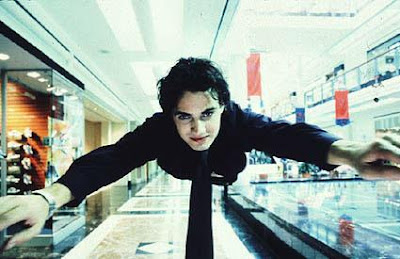 waydowntown is one of those films where the premise is a lot more interesting than the execution. Set in Calgary, it follows four coworkers who have made a wager about who can go the longest without setting foot outside. The buildings of the downtown core are connected via glass walkways, allowing them all access to their apartments, work, and various other locales without problem - except, of course, that not going outside is slowly driving them all mental. While the film certainly has its moments, by the end I felt like I was going a bit mental myself.

The four coworkers are Sandra (Marya Delver), Curt (Gordon Currie), Randy (Tobias Godson), and Tom (Fabrizio Filippo), who is essentially our guide through the story. They all work together in the same office, all of them occupying the bottom rung and forced to do a lot of thankless grunt work. Sandra has it particularly bad, having been dispatched to follow the company's founder around when he goes for lunch to ensure that he doesn't get caught stealing things. Sandra is lucky in that a mall is connected to the office building, allowing her to stay in the game, but she becomes increasingly convinced that her boss is really just screwing with her, a fact which a few clever shots seem to verify. Randy, meanwhile, has to find a way to maneuver himself to a building across the street (which has no connecting walkway) without leaving the building, and Curt is suffering from severe sexual frustration and desperate for relief.

Most of the film focuses on Tom who, when not trying to sabotage his colleagues in the wager, also has to contend with Bradley (Don McKellar), a morose cubicle-mate who spends most of the day trying to commit suicide; retrieving the company's birthday gift for its klepto founder, and some dramatic romantic complications. Specifically, he hits on a girl, her boyfriend freaks out, and nothing that Tom does can alleviate the situation, which may actually have more to do with attitude than effort.

When not dealing with these various plot points, Tom ponders the trap that he and everyone around him have fallen into. There's a degree of convenience to the way that the skyway system is built, but always being inside is also kind of suffocating and leaves the world seeming muted and grey. Everyone scurries around like rats in a maze, while Tom looks on with bemusement because everyone else seems oblivious to the deeper truth of which Tom is aware. To be honest, I spent most of the movie wanting to smack the smug off his face. The other characters are a bit more palatable, but none are really fleshed out or allowed to take on dimension. Personally, I would have liked to see more of Bradley - who spends most of the day stapling motivational slogans to his chest and the rest of the day trying in vain to break a window so that he can jump out of it - and the mall security guard, who complains to Randy that he hates people who feel entitled to not have to step out of the way when they're about to walk into someone coming in the opposite direction. He declares that he will no longer accommodate such a thing and will force them to step out of the way by vehemently refusing to step out of the way himself. I don't know why, but I found this whole mini subplot hilarious because that is exactly the kind of little, ultimately inconsequential, matter of etiquette that can drive a person up the wall if they encounter it often enough.

Director Gary Burns does a good job of creating a claustrophobic atmosphere, creating a world inside the cluster of buildings that at times seems wholly without connection to the world outside at all. The few shots we get of the streets outside are almost startling when compared to the scenes set inside because everything seems much brighter and more alive. Burns also does well at establishing and maintaining a consistent tone, carrying the narrative along with dark humor and at an effective pace. The only real problem that I have with the film is that the characters are so thin and to me it's a big enough flaw that I don't really feel that I can recommend the film despite its finer qualities.

"waydowntown is one of those films where the premise is a lot more interesting than the execution."

You've summed up 90% of Canadian films in your first sentence.

Aw, come on. There are plenty of good Canadian movies.

You're right but that's like saying that there are plenty of good direct-to-video movies too. They exist, you just need to see a lot of crap to find one. I think the problem with Canada these days is that they are trying to hard to make Americanized movies like Bon Cop, Bad Cop and they just don't have the resources to pull it off. However, Egoyan remains one of my favourite directors so there you have it.