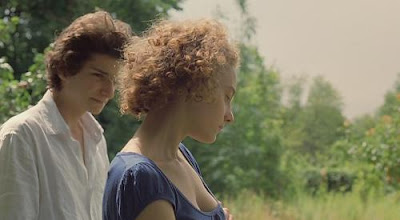 Year: 2009
Director: Olivier Assayas
Great Because...: It really captures the essence of what the film is about and does it in an utterly beautiful and elegant way. The story is about the inevitability of loss, the desire to hold on, and the ultimate need to let go, and all of this is perfectly summed up in a few short, simple words at the end. It's a perfect conclusion.

The summer house has been in the family for generations and is where the now adult children of Helene spent many happy times and where their children have good times of their own whenever their parents can find the time to visit. Helene spends her final years there, knowing that once she's gone the house will likely be sold, though her elder son, Frederic, insists that they'll want to keep it.

True to Helene's prophesy, Frederic finds that he's the only one who wants to keep the house. His sister Adrienne and brother Jeremie, though they cherish their memories of the place, just can't justify the expense of maintaining it since, unlike Frederic, they no longer reside in France and therefore wouldn't have many opportunities to make use of the property. Frederic resigns himself to the sale, just as he and his siblings have resigned themselves to selling many of their mother's possessions - it's what she wanted, after all, for them to be free of the encumbrances of the past.

Before the house is sold, Frederic allows his teenage son and daughter to throw a house party there, a last hoorah for the place before it passes out of the family forever. Down by the lake, the daughter talks to her boyfriend, telling him that she used to pick berries with her grandmother and that one day she was supposed to have come back to pick berries with her own children. "My grandmother is dead. The house is sold," she says sadly. In the distance someone calls for them and they run off to hide, marking a quick shift in tone from intense nostalgia to playfulness. Life goes on.

The final moments of Summer Hours capture something deep and easy to relate to. It's not just the house, but the experiences that took place in it and the people who are no longer alive but whose memories are so tightly linked to it. The scene evokes the very elusiveness of memory itself and the inevitable reluctance about moving away from tradition. It's an ending that resonates not only for its content but for the graceful way in which it is filmed. It's a beautiful scene and strikes the perfect ending note.

There was recently a big scandal over at my own blog between me and a fellow blogger after I said that I thought this movie was good but minor. However, you are right about the ending, it also struck me as being truely great and the perfect way to close off this story.

@Mike Lippert: I'd have to agree with your assessment of the film as a whole. It's a perfectly respectable effort and I'd recommend it, but it somehow never really feels that important.