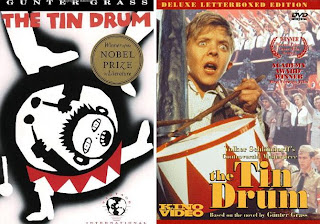 Plot: The Tim Drum is an allegory that takes the form of a bildungsroman and follows the life of Oskar Matzerath. Oskar is born in Danzig in 1925 and the story explores the rise and fall of Nazism through his eyes. An accident as a child stunts Oskar's growth so that even as he gets older, the "child's eye view" is maintained because he's always treated like a kid, and he carries his tim drum - which symbolizes his carefree childhood - with him everywhere, banging on it fiercely.

Primary Differences Between Book and Film: The film is pretty faithful to the half of the book that it explores, but in telling only half of Gunter Grass' novel, it does profoundly change the meaning of the story. In the novel, everything is symbolic: Oskar's official father symbolizes Germany, his probable father symbolizes Poland, his mother symbolizes the Polish Corridor. Oskar's physical deformity symbolizes the social/political deformity that makes the rise of National Socialism possible. The film ends at the end of WWII, when the German citizens who aren't being executed are being expelled from what was once Danzig, and Oskar begins growing again. Taking the symbolism of the story into account, this ending then suggests that the end of the Nazis also marks the end of Nazi mentality. In the book, Oskar does start growing again at the end of WWII but the growth quickly stops again and, thus, the deformity isn't eliminated, it's just taken a different shape. The book then goes on to explore the effect that eliminating the Nazis but not dealing with the circumstances that made the Nazis possible has on the people in Germany.

For The Book: Aside from Grass' fantastic prose, there's part of Oskar's personality that is much easier to take in print than on film. He has the ability to scream so loud that he can break glass and he demonstrates his talent with a fair bit of frequency. Obviously that's much easier to take in the book than it is in the film. Also in the book's favor is the fact that it's just a lot more resonant than the film. By telling only half the story, the film really just scratches the surface of what Grass is able to accomplish.

For The Film: The performances are excellent (even though, I have to admit, that David Bennent, who plays Oskar, kind of creeps me out as the character gets older) and it's visually stunning. Writer/director Volker Schlondorff translates scenes from book to film increadibly well.

Winner: The book is one of my favourites so, I've gotta go with the book. The film is quite good, but for me it just doesn't reach the heights of the source material.