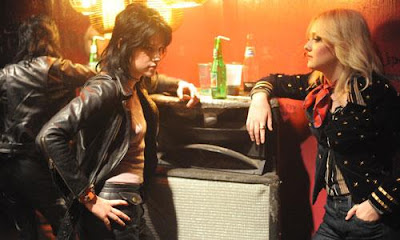 When it comes to The Runaways I’m going to have to apply the I-may-not-know-art-but-I-know-what-I-like principle. As with last year’s Whip It! I recognize and acknowledge that it’s a completely conventional, by the numbers genre film with some pretty big flaws, but... I liked it. I liked it a lot, in fact, even though seeing Dakota Fanning make out with people makes me feel very, very old.

Contrary to its title, The Runaways really isn’t about the band in its entirety, but about singer Cherie Currie (Fanning), guitarist Joan Jett (Kristen Stewart), and, to a lesser extent, manager Kim Fowley (Michael Shannon). The other members of the band factor into the story so little that they don’t even get a “And this happened to...” write up at the end the way those other three do. The story starts out showing Cherie and Joan casually crossing paths with each other in the L.A. club scene and being brought together by Fowley, who spots Cherie and decides that she has the look that he wants for the singer of the band he’s putting together that so far features Joan and drummer Sandy West (Stella Maeve). She joins the band and shortly thereafter they’re off in search of fame and fortune.

Fame comes relatively easy – Fowley knows how to market the group, relying largely on a jail bait image to promote them – but fortune is harder and while they’re out on the road the band is calling Fowley back in L.A., begging for more money so that they can buy food. It isn’t exactly the height of glamour but their hard work gets them a record deal and a tour in Japan, which ultimately brings on more problems. Fowley’s promotion of Cherie above everyone else causes dissent within the group which is compounded by Cherie’s growing drug problem and her guilt about not being home helping to take care of her dying father. It’s a powder keg situation just waiting for a match.

On the one hand, you could put the plot points of this story together in your sleep; at no point does it ever really try to break the rock and roll movie mould. The story is also kind of shapeless and some sequences look like music videos, which I suppose shouldn’t be surprising since director Floria Sigismondi is also a music video director. What saves the film are the performances and the fact that it uses its very standard story to explore themes that are still very relevant. In particular, it is deeply concerned with the way that female entertainers are marketed and accepted in the mainstream. Fowley emphasizes a hyper sexualized image for the group and especially for Cherie, who is too inexperienced and submissive to tell him no even when he’s asking her to do things that make her uncomfortable. One of those things is a racy photo shoot that ends up becoming a major bone of contention with the rest of the group because it puts the spotlight squarely on her and because it solidifies the sexpot product that Fowley is trying to sell. Joan spells it out, stating that The Runaways will never be taken seriously because the image Cherie is helping to promote overshadows the music itself.

The three main performances by Stewart, Fanning and Shannon are all very good. Fanning is a bit stiff in the earliest scenes but quickly seems to relax into the role and handles the heavy material expertly. Shannon, who was one of the most memorable things about Revolutionary Road, turns in another memorable performance as the savvy but still scummy manager who introduces himself to Currie with the words: “I’m Kim Fowley. You’ve heard of me.” It’s a performance that is by turns funny and scarily intense and in certain respects it anchors the film, representing all that the band is up against from the industry and the audience. The real star, though, is Stewart who absolutely nails the Joan Jett swagger and attitude. Having seen very little of her work to date, I've never really formed an opinion of Stewart as a performer but after seeing her in The Runaways I think she has a very raw, very natural talent and I hope that she finds other roles like this one that allow her to showcase that.

The Runaways is far from a perfect movie and one that will certainly frustrate those who want a real exploration of the band and its collective highs and lows, but I still found it to be a very enjoyable film experience. Enjoyable enough to recommend it despite its flaws.

hmmm..haven't seen this yet. I was a little concerned with Kristin's acting here. but this may be a rental for me

Im renting it as soon as its available, I enjoyed Whip It too. Its by the numbers, but entertaining anyways.

Some of your readers may find my recent radio show, Tribute To The Runaways, an interesting listen. It explores the band's music, solo music and bands that have benefited from their groundbreaking work. It can be streamed for free at http://www.neatnetnoise.com.

I just saw this and thought it was pretty great, despite its conventions. I was really impressed with Stewart, who's been so stiff and boring in other movies I've seen but nailed it here.

It boils down to being about the excellent performances, but also the ultra-rockin' music- I was on a Runaways/Suzi Quatro kick for two days straight after the movie ended! I hope their music sees a resurgence because of the film.

@Candice Frederick: She's really quite excellent in this movie.

@Film Connoisseur: Neither film can be accused of being terribly original, but both are fun and worth a look.

@Alex: I hope the music sees a resurgence too. When I Love Rock and Rock started playing at the end, I was so ridiculously happy.