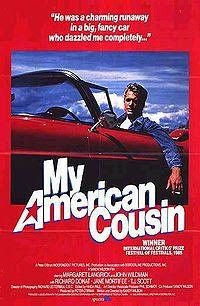 Sandy Wilson’s My American Cousin pulls off a difficult feat. It manages to be both believably nostalgic and intensely ironic, sometimes at the exact same moment. Widely embraced when it was released, the film won 6 Genies, including Best Picture, Director, Actor and Actress, and was nominated for 5 more awards in addition. It has held up very well and is perhaps one of the Genies' best choices for Best Picture.

The story is seen from the distance of decades, recounted by the now grown up protagonist as she remembers the summer when she was 12 and the sudden appearance of her 17 year old American cousin made things suddenly exciting and glamorous. The protagonist is Sandy (Margaret Langrick), who is anxiously awaiting her entrance into adolescence and romance, and the cousin is Butch (John Wildman), who appears to have modelled himself on James Dean in Rebel Without A Cause. Sandy immediately develops a crush, though it appears to be less on him than on the things he represents. In his flashy convertible she sees her own freedom and she dreams of taking off with him, escaping from her dull life where nothing ever happens except the same thing that happened yesterday and the day before.

Butch isn’t all he seems. For one thing, the car isn’t his; it belongs to his parents, who intend to get it back. For another, he’s not really as tough as he’d like people to think. When Sandy expresses her desire to run away, he tells her that it’s a bad idea because girls can’t take care of themselves in the big bad world – but what about him? He ran away, sure, but went right to the comfort and safety of his aunt and uncle’s house which, incidentally, is probably not the best place to run to if you don’t want your parents to catch up to you. Sandy continues to hold out hope that Butch can offer some escape for her, even as she becomes increasingly disillusioned about him and aware that maybe she isn't ready for the big bad world after all.

The screenplay, written by Wilson, is very sharp, particularly when it comes to the character of Sandy. She's very smart but also appropriately naive, thinking that she's much wiser and grown up than she is, as is often the case with teenage girls. Her longing for excitement is foregrounded in the film's first minutes, as she writes in her diary "Dear Diary, nothing ever happens." She's in a hurry to get to adulthood, to get out from under her parents' thumb, to live the kind of life she reads about in books. She's a very engaging character, the perfect point of entry for the audience into this story, and she's played very well by Langrick. She perfectly captures the restlessness of the character and in doing so injects the film with a strong, vibrant energy. Both she and Wildman have to play their characters on two levels - as the worldly personas they want to be, and as the kids they actually are - and they work off each other very well, guiding their characters through a relationship that always seems to be shifting, always seems to be open to new possibilities.

In certain respects, My American Cousin is like a lot of other movies of its type, coming of age stories told from the point of view of a now adult protagonist, tinged with fondness and a gentle kind of irony. Ultimately, that actually works in the film's favor because it lends a sense of familiarity to the whole story that allows you to just relax into it and enjoy it. It's a film that finds just the right notes and brings together exactly the right people to make it work. It's definitely deserving of its status as a Canadian classic.