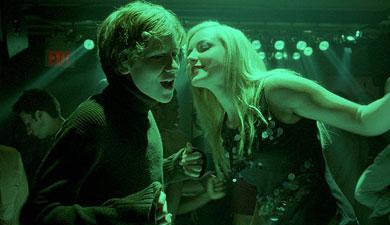 It's a familiar story. Cute kid becomes big star, enjoys fame, fortune and having people attend to his every whim, lets it go to his head and acts like a bit of a terror. You'd hate him if you didn't know the typical second act of a story like his, where the kid peaks at adolescence and spends the rest of his or her life on the decline, often falls into drug addiction and trouble with the law and becomes such complete tabloid fodder that most people forget why they were famous in the first place. Though it touches on that tragic second act through a supporting character, Childstar is more interested in exploring the tense period of transition between the two acts and while it ends up being a bit lightweight, there's still much to recommend in it.

Don McKellar stars as Rick, a former university professor who has given up his job in order to follow his dream of making movies and finds himself forced to make ends meet by working as a limo driver. One of his clients is Taylor Brandon Burns (Mark Rendall), a 12-year-old superstar of film and television with a healthy ego and a ruthless stage mother, Suzanne (Jennifer Jason Leigh in a great performance). Rick quickly rises through the ranks, first being promoted from simply being the driver to pick Taylor up from the airport to become his permanent driver, and then becoming Taylor's onset tutor after he terrorizes all of the official onset teachers, and then becoming Taylor's legal guardian so that he can work even if his mother is off set. His unimpressed, no nonsense manner is what sets him on the fast track – well, that and the fact that he’s sleeping with Suzanne.

The thing that really sets Rick apart from the other people on the set is that he sees things the way that a normal person would, separate and apart from the bottom line of movie making. He notices, for example, the toll that making the movie has on Taylor, both mentally and physically, and when Taylor runs away to escape the pressure, he’s just about the only person to be concerned for Taylor’s safety rather than for the fate of the film in the event that something has happened to its star. Taylor is at a crucial moment in his career: his brand is at the height of profitability and those who want to make a mint off it need to do it fast because he’s about the enter that difficult stage when children start to become adults, a stage when child actors often find themselves starting to fade into obscurity.

Directed by McKellar, the film finds just the right tone. It acknowledges the more glamorous aspects of stardom – big houses, money to burn, people willing to see to your every whim – but also examines how damaging these things can be both to the person not yet mature enough to handle them and to the people who ought to know better, but allow themselves to become corrupted by it. Suzanne is the most corrupt figure in the film, so enamoured with what Taylor's success can get her that she seems blinded to Taylor as a human being. She's more than happy to take responsibility for spending the money that Taylor brings in, but she has no interest in taking responsibility for caring for Taylor in any constructive way. She's an ugly character, the definite villain of the piece, but Leigh manages to keep her from being a two-dimensional monster of a stage mother. It's to the film's credit that it doesn't go the easy route to redemption with her but allows her to keep her sharp edges to the end, trusting that Leigh can make her seem human despite all evidence to the contrary.

In the lead McKellar does a fine job and it's funny to watch Rick interacting with the movie industry characters because he is so consistently unimpressed with them and they in turn are baffled by him because they're so used to people treating them as if they're impressive. What Rick ultimately reveals is that the others have bark but don't actually have any bite to back it up - except, possibly, Taylor, who manages to give Rick a bit of a run for his money. As Taylor, Rendall accomplishes more than you might initially expect of him, capturing the brattiness that someone of his age and level of fame would likely have, but also the loneliness of his position. He's too young to really relate to adults but he's also far too experienced to have much in common with anyone his own age. He's isolated by fame and will never really be a "normal" person; even if his star fades, people will still recognize him as Taylor Brandon Burns and expect him to spout his famous catch phrases and generally be their clown. As unlikeable as the character often is, it's easy to feel sorry for him because he's at a point in his life and career where things could easily turn disastrous.

Childstar doesn't quite reach the heights of Last Night, McKellar's previous directorial feature, but it's a film that is still well worth a look. The script (by McKellar and Michael Goldbach) is smart, dark and funny and aside from the three performances already discussed, there's also a funny supporting performance from my favourite Kid in the Hall, Dave Foley. There's also a vaguely creepy cameo by Alan Thicke but... I'll leave you to discover that for yourself.

After I had read your review, I think that I should watch this film a second time, because I was a bit harsh towards this film when I reviewed it. Anyway, back then, I thought that the film hit the nail right on the head in its depiction of Hollywood. However, I thought that the characters were somehow caricatures. For instance, I'd liked to see an exploration of this need from Hollywood execs to make dumb films and even outstanding ones just to balance the books. Nonetheless, these caricatures well portrayed by the cast, especially by Gil Bellows, Mark Rendall, Don McKellar and Dave Foley.

"Directed by McKellar, the film finds just the right tone. It acknowledges the more glamorous aspects of stardom – big houses, money to burn, people willing to see to your every whim – but also examines how damaging these things can be both to the person not yet mature enough to handle them and to the people who ought to know better, but allow themselves to become corrupted by it."

Couldn't agree more with that. Despite its flaws, I'd recommend Childstar, since it made me laugh.

I would have to agree that many of the supporting characters are litte more than caricatures, though I think they're played well.