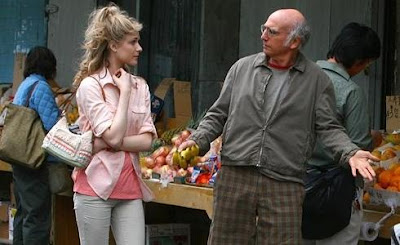 Whatever Works, Woody Allen's latest addition to his oevre, is at best a mildly amusing film and at worst a waste of the assembled talent. The story was originally conceived decades ago and shelved following the death of Zero Mostel, for whom it was written. Having three decades and change to smooth out the creases should have made this a strong effort, but it just never really gets off the ground. This isn't the worst Woody Allen film of the last ten years but as even the most ardent Allen fan would have to admit, that isn't saying a lot.

The obligatory Woody character here is Boris Yellnikoff (Larry David), an angrier and more aggressive alter ego than usual, but one who is no less neurotic than the others. Boris is a self-proclaimed genius who was once almost nominated for a Nobel Prize, is divorced from a woman with whom he was "perfect on paper," and hates pretty much everything. His philosophy of life is that one should do whatever works in order to be happy. By the time it comes to the end, the film will have offered up a number of non-traditional and, to greater and lesser degrees, less societally acceptable relationships to demonstrate that principle, which is itself another way of saying "the heart wants what it wants," Allen's famous (infamous?) explanation of his relationship with Soon-Yi Previn.

Boris meets Melodie, a teenage runaway from Mississippi played by Evan Rachel Wood, who nails the spirit of the character but falters when it comes to the accent. Melodie moves in with Boris, platonically at first, and slowly erodes his resolve to not get romatically involved with her. They marry and get into a comfortable routine which is disrupted first by Melodie's mother (Patricia Clarkson) and later by her father (Ed Begley, Jr.), both of whom disapprove of the relationship.

Whatever Works has been called "vintage" Allen by some and though it is reminiscent of Annie Hall in that it consistently breaks the fourth wall, allowing Boris to directly address the audience, that is where the similarities end. The dialogue is crisp but the story itself feels half-baked and so do many of the characters. Melodie and her parents, in particular, are little more than charicatures of right-wing, ultra-religious Southerners and targets this broad should be beneath a writter as intelligent and clever as Allen can be. These characters don't feel real and neither do their relationships and since the story is about relationships, that makes it all seem just a little pointless.

While there is much about this film that doesn't really work, it isn't a total failure. It certainly has moments that are inspired, some great lines scattered here and there, and the combination of Woody Allen and Larry David is great. Hopefully the two will work together again but with stronger material.

Posted by Norma Desmond at 8:30 PM