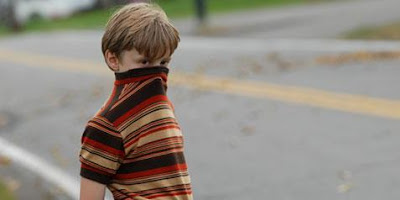 Phillippe Falardeau’s It’s Not Me I Swear! is about a ten-year-old boy who is a compulsive liar, a vandal, and a fire starter with a penchant for giving people the finger and attempting suicide. It’s a comedy. That it works as a comedy is somewhat miraculous, as is the fact that the film becomes an effective study of character and family dynamics. It’s an odd film to be sure, but also pretty great.

Our hero is Léon Doré (Antoine L’Écuyer), whom we meet for the first time as he’s attempting to hang himself with the gymnastic rings hanging from a tree in the front yard. He’s saved by his brother, Jérome (Gabriel Maillé) and their mother, Madeleine (Suzanne Clément) and when Philippe (Daniel Briere), the family patriarch, comes home he dismantles the rings – another toy poor Jérome has had to watch be thrown out because his brother is off-kilter.

Léon is not a normal boy. He lies so much that his mother has given up on asking him not to lie and simply advises him to keep his cover stories straight. His parents fight constantly – his father is a straight-laced lawyer who wants simply to appear “normal” (a trait he shares with Jérome), while his mother is more free-spirited and feels stifled by her husband’s need to conform. Eventually Madeleine will have had enough and decides to leave, fleeing to Greece in the hope of realizing her frustrated dreams of becoming an artist. Léon becomes determined to find a way to join his mother in Greece, eventually joining forces with Léa (Catherine Faucher), a neighbourhood girl desperate to reconnect with a family member of her own.

It’s Not Me I Swear is probably best classified as a coming-of-age film, though its protagonist is only 10. What he learns during the course of the film, which takes place during the summer and a few weeks of the fall of 1968, are defining and alter him irrevocably. He begins the summer thinking of Léa as a mild irritation, then takes her on as a partner in crime and slowly comes to feel affection for her. The friendship, however, proves to be problematic for her and she’s eventually forbidden from having anything to do with him because he’s a bad influence. The reversal in their relationship – from him rejecting her to her rejecting him – makes him cynical, as does the outcome of his mother’s “trip” to Greece. He spends most of the summer believing that one day she’ll come back – an idea that Jérome thinks ludicrous – only to realize that it’s a situation of greater permanence after she fails to return following one of his suicide attempts. This realization, along with the revelation that Philippe has had her address all along and denied the boys the opportunity to write to her, causes a shift in the family. Suddenly Léon is prepared to leave his mother behind, while Jérome – who had previously rejected even the memory of her – begins to cling to that maternal connection while pulling away from his father.

The film succeeds on a number of levels, but especially in the realm of casting. Falardeau gets particularly great performances out of all the younger actors, with special mention going to L’Écuyer. Léon is a difficult character, one that could easily be insufferable and one that requires equal amounts of maturity and immaturity. L’Écuyer is able to achieve that balance with an ease that actors of greater experience would envy. Léon is a flawed character but he’s played flawlessly by L’Écuyer.

It’s Not Me I Swear! is a really good movie, alternately funny and touching. It isn’t entirely immune from the clichés of the coming-of-age story, but it certainly gives them some snap and vigour so that you never get that “been there, done that” feeling.