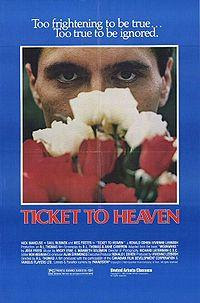 Ralph L. Thomas’ Ticket To Heaven is an intimate portrait of the closed and intense inner world of a cult, and the vulnerable young man who gets sucked into it. It is a film that is far from perfect, but it’s simple, no-frills style of storytelling is effective and engaging. Though parts of it feel a little dated now, overall its story is easy to slip into and is powerfully told.

The story begins with David (Nick Mancuso), a young man at a crossroads. He loves his girlfriend but, as his best friend Larry (Saul Rubinek) points out, he’s only really crazy about her when she’s about to leave him due to his infidelities. Lonely and directionless, he decides to visit a friend in California who in turn introduces David to some of his new “friends.” They talk him into joining them in what they insist will be a short trip to a camp in the countryside, where soon their intense religious rhetoric has completely overtaken him. What is most interesting about this film is that David isn’t a weak-minded person who is easily manipulated. He recognizes the cult for what it is – though he’s too polite to call it what it is – but finds himself succumbing to it anyway. Part of this is due to sleep and food deprivation, but part of it is his desperate need for human connection, which he gets in spades from his fellow cult members even as they isolate him from the world outside of their farm.

The first half of the story, give or take, focuses on David falling in with the cult and making a couple of small and ultimately futile attempts to break free. The second half deals with his family’s realization of what he’s gotten himself into and their efforts to break him free. Larry infiltrates the cult – almost getting sucked into it himself in the process – and with help from David’s family and friends, get him away from the group so that he can be “deprogrammed.” The deprogramming scenes are brutal in their own way and in certain respects more brutal than the indoctrination scenes, calling into question whether David will be able to come out the other side in one piece. His journey from individual to brainwashed follower back to individual is not an easy one, in part because the idea of giving up agency, sacrificing all that made him himself but also those things that caused him so much distress, is so appealing to him.

The story is told in simple, effective terms and manages to find the right tone for every scene. Objectively, it’s difficult to understand how a reasonable person could get sucked in by people who seem upbeat and happy to an extreme that verges on being disingenuous. However, the film gets close enough that you can begin to understand how a person could be swept up in the communal fervour in even a short period of time. The intimate construction of the story is crucial to its success, but so is the film’s ability to take a step back from the action. The story does not unfold with a heavy hand, but with a lightness of touch that allows the action to move forward without it seeming that the action is being moved forward by outside forces. It’s a delicate balance that Thomas seems to achieve with ease.

The standout performance in the film comes courtesy of Mancuso, who gets to explore various levels of David’s psyche. In Mancuso’s hands David is a character both strong and fragile at the same time, a man who desperately needs to belong and will do anything, fight anyone – including the part of himself that knows the group is a negative force – to retain that sense of place. It’s a performance rich in nuance and detail and the film is more than worthy of it.

Posted by Norma Desmond at 7:53 PM