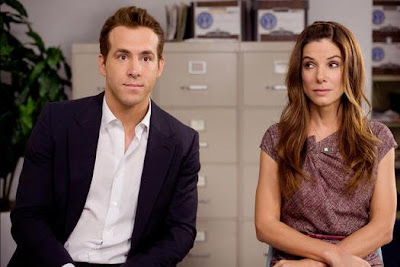 The Proposal is pretty much exactly what you would expect from the trailers: a lightweight charmer that hits all the necessary notes for its genre. You've seen this movie before, in one form or another, and it doesn't really make any attempt to break out of the tightly constructed romantic comedy box. That being said, as formula films go, this one is fairly good and its leads are engaging enough to make it worth two hours of your time.

The plot is set-up thusly: Margaret (Sandra Bullock) is the Editor-in-Chief at a New York publishing house who is loathed and feared by everyone in the office. Andrew (Ryan Reynolds) is her long-suffering assistant who dreams of one day becoming an editor himself. When Margaret, who is Canadian, is threatened with deportation she makes a deal with Andrew: marry her so that she can stay in the country and she’ll promote him to editor. In an effort to prove their “love” to the INS agent who sees right through their scam, they go to Sitka to visit Andrew’s family for the weekend and celebrate his grandmother’s 90th birthday.

I am entirely sure that I don’t need to tell you that Margaret and Andrew start off hating each other, that city-girl Margaret is a fish out of water in Sitka, that Andrew’s family embraces Margaret and she comes to like them in turn, and that Margaret and Andrew slowly realize that they’ve fallen in love. This is all, of course, standard, cut-and-paste stuff and The Proposal won’t be accused of breaking any new ground. It does, however, manage to keep things entertaining even though you can easily spot the all too familiar landmarks along the route from “I hate you” to “I love you.” This film doesn’t try to be anything more than it is, it simply focuses on making what it is work – and it mostly does.

Sandra Bullock is, always has been, and I suspect always will be, a very likable actress. Ryan Reynolds, similarly, crafts a screen persona that is easy to enjoy and engage with. The Proposal succeeds largely on their charm and the energy that they are able to give material which might otherwise be limp. They’re surrounded by romantic comedy standards like the wacky granny (Betty White), the ex floating around the periphery (Malin Akerman), and the vaguely creepy dude (Oscar Nunez) who manages to be everywhere. There’s also some family conflict courtesy of Andrew’s father (Craig T. Nelson) which contributes to the obligatory third act crisis leading to happy ending. Some of these supporting characters work and others do not. The ex-girlfriend, for example, serves little purpose and could have easily been lifted out of the story without affecting anything at all. The character is meant to be a threat to the potential relationship between Margaret and Andrew, but the film hardly bothers with her, knowing as well as we do that Margaret and Andrew are endgame and everything else is pretence.

What works in The Proposal works very well, although it never breaks away from some of the more problematic aspects of the romantic comedy genre. Because Margaret strives to be successful, she is also unhappy, alone, and a terror to everyone around her – women who pursue ambitions outside the home do so at the expense of their humanity. Andrew is ambitious, too, but he still gets to be nice and he isn’t the one the film seems determined to punish and humiliate into submission. Romantic comedies are marketed to women but they aren’t really made for women, they’re made to maintain the status quo, which is why characters like Margaret always end up being put in their “place.” It’s annoying, of course, but The Proposal manages to be less offensive in that respect than the average romantic comedy. Anyway, end rant, this is a good movie with a lot of laughs and a lot of charm and worth the price of admission.

Posted by Norma Desmond at 9:40 AM