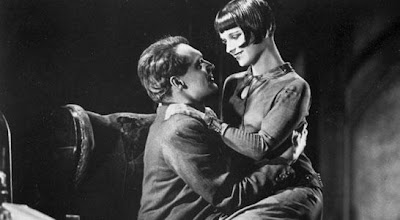 Georg Wilhelm Pabst’s Pandora’s Box is an epic, atmospheric tale that travels from the theatres of Germany to gambling dens in France and finally to the foggy streets of London, where the heroine falls into the arms of Jack the Ripper. It’s a big story, and perhaps just a touch "soapy," but it's expertly told and wonderfully entertaining.

As the title suggests, the film is about a woman who unwittingly unleashes turmoil on those around her. She is Lulu (played by the divine Louise Brooks), an impulsive and vibrant vaudeville performer and prostitute who, through the course of the film, will: marry her wealthy and much older lover and accidentally kill him at the wedding reception, be convicted of manslaughter, escape her prison sentence and run off with her stepson, almost be sold into sexual slavery… let’s just say that things keep going from bad to worse. When she finally meets Jack the Ripper, it almost seems merciful given the depths of misery and degradation to which she falls.

The film is significant for a number of reasons, not least of which is the “Lulu look” which is echoed in films such as Cabaret and Chicago. It is also credited with being the first film to feature a lesbian character, the Countess Augusta Geschwitz (Alice Roberts). Like most of the male characters in the film, the Countess falls under Lulu’s spell and then meets her doom. Roberts was apparently uncomfortable with the idea of playing a lesbian and it shows, as she never seems particularly at ease in the role, which is in sharp contrast to Brooks, who owns every moment that she’s on screen. Marlene Dietrich was the second choice to play Lulu and perhaps Pabst should have cast her as the Countess – lord knows she could work a tuxedo.

Although Lulu is condemned throughout the film, mostly by the men around her, she nevertheless seems to be a sympathetic character. There is an innocence to her, a child-like quality that ensures that her actions never seem malicious. She's the kind of character that things just sort of happen to, but the energy and life with which Brooks infuses the character allows her to seem like more than just a mere cypher. Lulu isn't stupid, though for a woman who has spent much of her life as a sex worker, she's awfully naive about the jealousy she inspires in men. On the other hand, perhaps she's just careless and self-centered. It can be hard to tell at times what's behind the mask of flirtatious innocence that Brooks wears for most of the film.

Pandora's Box is a well-crafted, well-paced film, though not without its tiny problems. I've already mentions Roberts' somewhat limp performance and aside from that there's the slight issue that the storyline sometimes goes a little too far over the top (the courtroom scenes, for example). Structurally, there's also a framing device wherein one episode transitions to another with "End of Act X, Beginning of Act Y," which gets a little irritating towards the end. These are, however, very minor flaws and the film is overall very watchable and entertaining.