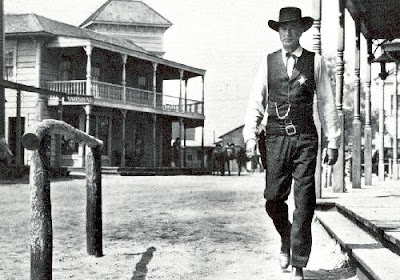 It’s the kind of thing legends are made of: a single man standing up for justice against the forces of tyranny. If that man were anyone other than Gary Cooper (or, okay, maybe John Wayne), that might make for an unfair fight but as it stands the sides are pretty balanced. It's a great movie from Fred Zinnemann, one of cinema's most incomprehensily underrated directors.

High Noon opens with a wedding and a crisis. Marshal Will Kane (Gary Cooper) has just married Amy (Grace Kelly), a Quaker for whom he has agreed to give up his job in order to take on a more peaceful occupation as a store owner. At the same time word is getting around that Frank Miller (Ian MacDonald) is expected back in town on the noon train and that his brother and their friends are waiting for him so that they can take revenge on Kane and the rest of the town. Officially speaking, Kane is no longer the town’s Marshal but, because his replacement won’t arrive until the following day, he feels compelled to stay and face Miller and his gang.

Everyone knows that when Miller gets off the train and is reunited with his gang, the situation is going to explode because Miller isn’t one to let go of a grudge and Kane is the man who arrested him, leading to an order of execution that has now been commuted. In order to effectively face down the villains Kane needs to organize a posse but no one in town is willing to stand up with him, including his Deputy Harvey (Lloyd Bridges), who is only willing to do the job in exchange for Kane’s promise to help him get promoted to Marshal.

With growing disgust, Kane watches as the people he thought that he could count on, the people whose comfort and safety he has assured for years, turn their backs on him and tell him to get out of town – not for his own safety, mind you, as he and certainly everyone else knows that if Miller wants him dead, he’ll find him; but because they don’t want to get caught in the middle of the trouble and would rather let Miller run roughshod over the town than stand up to him. With noon swiftly approaching, the townspeople hide themselves away, leaving the streets empty save for Kane.

The first thing that must be noted about this film is the simply marvellous performance by Gary Cooper. The western is a particularly masculine and macho genre and its heroes don’t often get to display the kind of vulnerability that Cooper makes available to Kane here. He’s a strong man and brave, but that doesn’t mean he can’t also be scared and agonized over the way that he has been shunned by the town. There’s never any real doubt about the way the story will resolve itself, but Cooper effectively conveys the possibility that it could turn out otherwise.

The film, which takes place almost in real time, is one of tightly-coiled intensity. It manages to tell a lot of story in a short amount of time without making the narrative feel crowded. There is a subplot involving Harvey and his anxiety over the state of his masculinity, which is intensified by his relationship with Helen Ramirez (Katy Jurado). As he exists in Kane’s shadow as a lawman, so he exists in Helen’s life, as she’s Kane’s former mistress. There’s no better way to explain Harvey’s problem than through Helen’s words: “You’re a good looking boy. You’ve got big, broad shoulders. But he’s a man. And it takes more than big, broad shoulders to make a man.”

Well-known for being an allegory about the communist witch hunts, High Noon manages to incorporate its politics into the story without doing so in a heavy handed way. However, while the film is powerful there’s something about the ending that is somehow not quite as satisfying as it should be because Kane’s final act is sort of a “you can’t fire me, I quit” kind of moment. It’s funny to me that while history has taken to including those who “named names” amongst the villains of the HUAC hearings, a film in defence of doing so (On The Waterfront) resonates so much more deeply than a film about standing up to the Red Scare thugs. Don’t get me wrong, High Noon is a great movie, but it lacks some of the punch of Kazan’s masterpiece.

I didn't interpret his final act as a "you can't fire me, I quit" moment. It always registered to me as his disgust with the people in that town. The gold star used to represent something, but because of their cowardice, it's lost meaning to him.

High Noon is one of my favorite films, and I enjoyed reading your thoughts on it. I wish you were more satisfied by the ending, but seeing as how you rated it so highly, that couldn't have been too big an issue.

This is one of my favorite westerns. Gary Cooper is great in it. I love the way it plays out in real time. I usually find that to be a pretty effective technique at creating suspense when it is done well and this movie does it well.

I also agree about On The Waterfront. It does have quite a bit more punch than this movie but I always try to forget that Kazaan made it to defend his actions in naming names.

We're linking to your article for Academy Monday at SeminalCinemaOutfit.com

Keep up the good work!