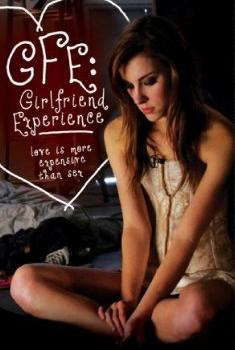 Girlfriend Experience isn’t exactly what I thought it would be, mostly because I thought it was The Girlfriend Experience by Steven Soderbergh. My confusion is understandable given the similarities in the titles and the fact that the back of the DVD box said “director: Steven Soderbergh” which was, in fact, a lie. I’m still interested in seeing Soderbergh’s film, but I hope that it isn’t as pretentious and boring as this one.

Girlfriend Experience is shot by handheld camera in a documentary style, intercutting “candid” scenes with staged re-enactments and man on the street interviews. It follows Daniel (David Lewis), a man addicted to paying for sex who describes himself as going through binges and purges, giving up prostitutes for months at a time only to fall back into the pattern with a vengeance later. He has a girlfriend, Maddy (Tara Frederick), who is aware of his issues and tacitly accepting of the fact that, once in a while, he’ll pay another woman to sleep with him until he gets an STD which he passes on to her. She kicks him out of the house and he begins to spiral out of control.

Daniel becomes obsessed with a prostitute named Adrian (Ivy Vine), who offers “the girlfriend experience” as part of her services. She sells companionship in addition to sex and eventually Daniel convinces himself that what they have together is real, that they have feelings for each other and a future together. He’s crushed to discover that he’s wrong when she rejects his offer to keep her in an apartment, though she does eventually start to come around. Once again, however, he finds himself with shattered illusions as Adrian begins to let her guard down, dropping the act in certain ways – replacing her red heels with flip flops, for example – and even going so far as to tell Daniel that she’s loves him, something that he claims he’s wanted to hear from her though he recoils once she says it. He is, after all, still trying to work things out with Maddy.

Girlfriend Experience has an interesting premise but for a lot of reasons the film doesn’t really work. To begin with, it’s very badly paced - for a film that only runs about 77 minutes, it feels long, due in no small part to the fact that the material plays out in such a limp and lifeless way. The strategy of playing “real” scenes against re-enactments also fails, because the candid segments feel just as staged as the re-enactments and about half as honest. The film never, at any point, achieves a believable enough level of reality to forge a connection between the audience and the situation on screen. The biggest problem, however, is that the characters never seem to act out of personal motivation and are instead stuck playing to the tune of the plot’s clunky machinations.

Somewhere in all of this there’s a decent movie trying to get out, but it’s buried too far down. The film needs a tighter script, a clearer focus, and more fire in its performances to make it really worth watching. As it stands Girlfriend Experience is at best forgettable and at worst frustratingly lame.

Hey Flick Chick, thank-you for reviewing my film, even though you hate it!
There's more info about Girlfriend Experience on my blog. Check it out.
http://pietrobruno.wordpress.com/

Thank you for not taking it personally. For what it's worth, I thought that the scenes involving Daniel's realization that Adrian is a real person - and subsequent disillusionment with their relationship - were well done.