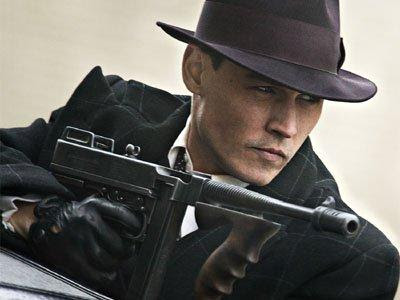 Public Enemies is a slick, high-energy crime movie from Michael Mann, a director who specializes in slick, high-energy crime movies. Though much blood is shed and countless bullets sprayed from one end of the film to the other, it manages to be more than just a shoot-em-up, cops and robbers story. The film plays with the romanticized myth of John Dillinger in particular and bank robbers in general, asking why it is that we continue to find people like him so fascinating and worthy of celebrating.

Johnny Depp stars as Dillinger, bank robber and folk hero. As portrayed by the film, Dillinger is an intelligent man, loyal to his friends, living one minute at a time. Though he has no qualms about killing people, the robberies he plans are designed so that they can be completed without civilian casualties, which is in stark contrast to the robberies carried out by Baby Face Nelson (Stephen Graham), who is characterized as being so trigger happy that bank jobs seem like little more than excuses to shoot people. Obligatory in a film like this is a moment when the dashing criminal informs a civilian to hold on to their cash because “I’m here for the bank’s money” – and Public Enemies doesn’t skip this beat. Though the film tries to be critical of the adulation expended by the public on people like Dillinger it, too, falls under his seductive spell. I would be surprised to learn that someone came out of this film on the side of the law, depicted here as largely incompetent and increasingly brutal.

Between jobs Dillinger gets involved with Billie (Marion Cotillard), a spunky coat check girl who is excited by the danger than surrounds him but worried about what the future may hold. Depp and Cotillard have nice chemistry and create a believable enough relationship, but the fact that a role like Billie in a film like this is thankless is inescapable. The girl’s job is to worry and comfort and encourage and occasionally to cover – she’s an extension of the male hero and exists solely to meet his needs at any given time. The exception to this rule is a character like Bonnie Parker from Bonnie and Clyde, who becomes a driving force in the narrative and plays a very active role in the story. Parts of Public Enemies is reminiscent of Arthur Penn’s crime movie masterpiece, in particular the scene of an ambush of Dillinger, Baby Face and the gang at a motor lodge that turns into a bloody spectacle. The action sequences in Mann’s film are uniformly well-done, moving with high intensity without ever making the audience feel lost in the action. Even though things are happening fast, you always know what’s going on; it isn’t just a lot of flashing lights, colors and sounds.

Running alongside Dillinger’s escapades is the story of Melvin Purvis (Christian Bale), an FBI agent on the rise who has been handpicked by J. Edgar Hoover (Billy Crudup) to bring Dillinger to justice. Though Purvis is the good guy, he isn’t presented here as a rootable character and is figured instead as a man so determined to capture Public Enemy Number One that he’s willing to take risks which put his FBI comrades as well as civilians in danger. Bale does well in the role, adding layers to the character to show how conflicted he is over the ways in which he’s achieved his mandate. The character is neither as charismatic as Dillinger nor as flashy as Hoover, whom Crudup seems to have a lot of fun with, but Bale ensures that he never feels superfluous.

The film works in large part because it creates a nice balance between action and story. When the action comes, it comes fast and furious but there are plenty of lulls in which the characters are allowed to be fleshed out and the audience is allowed to catch its breath. I don’t know enough about the real John Dillinger to attest to how accurate the film is, but the screenplay is well-written regardless and is especially strong in the way it makes clear that Dillinger presented a problem not only for law enforcement agencies, but for other criminals as well. Because his crime spree crossed over state lines, it became necessary to create a federal agency to deal with him, an agency that could also deal with organized crime syndicates which stretched from one coast to the other. As seen here, Dillinger is a criminal who needs to be shut down not only for the sake of the law, but also for the sake of other criminals.

The various elements of the story complement each other nicely and create a cohesive narrative. I don’t know that Public Enemies says anything that hundreds of gangster movies haven’t said before, but it’s a solid, entertaining film. The only real complaint that I have is that it seems to peter out a little bit at the end, but for the most part the film excels at building and maintaining tension.

Posted by Norma Desmond at 5:43 PM

"I would be surprised to learn that someone came out of this film on the side of the law, depicted here as largely incompetent and increasingly brutal."

The sad truth is that many people don't even know that torture was once tolerated as a mean for getting to one's ends. Although a Western country like Sweden abolished the use of torture by the end of the 18th century, police departments in many countries liked to obtain a confession under duress. All in all, while watching this film, I didn't feel more sympathy for one side of the law over another.

In my opinion, the film shows more or less well that Dillinger was revered (so to speak) by the American population. However, the film didn't establish a deep relation between masses' sympathy for Dillinger and its feelings during the Depression. Obviously, did many people applause (except the BOI) Dillinger's bank robberies because they felt robbed by the banks? Was it seen as good news for them in a time of sadness due to unemployment and so on? Judging from the second question, the film speaks for itself. However, as for the first question, I think that people blamed the government more than they blamed the banks as far as I know. Finally, the film is rather good for a summer blockbuster.

It's even sadder that the debate over whether torture is a legitimate method of interrogation is still ongoing.

Agreed that it's better than the average summer entertainment.

Mann draws a sprawling cast together with a myriad of period details that give an authentic sheen, without letting the audience get confused in the sea of historic information. Check out my review, when you can! Nice Review!