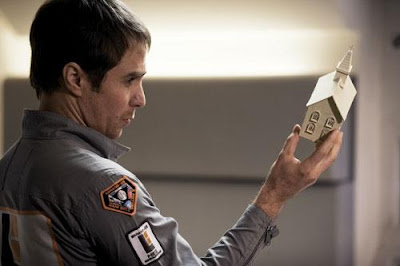 Finally! After months of soggy romantic comedies and soulless CGI extravaganzas that amount to little more than bright colors and loud sounds, comes a truly great and engaging movie. This first feature length film from writer/director Duncan Jones is a smart science fiction story in the tradition of 2001: A Space Odyssey and Solyaris that not only does everything right, but does it on a small budget. Run, don’t walk, to the theatre to see this movie and don’t read any farther if you want to go into this completely unspoiled.

The film takes place in the future when 70% of the earth’s energy is supplied courtesy of the moon through Lunar Industries. Sam Bell (Sam Rockwell) mans the moon base, the only human on-board with no one but the robot GERTY (voiced by Kevin Spacey) and the occasional video transmission from earth to keep him company. He’s nearing the end of his three year contract and anxiously awaits his return to earth where he expects to be reunited with his wife, Tess (Dominique McElligott) and their daughter, Eve. Strange things have started happening to Sam – he’s seeing things and convinced that he’s losing his mind, but he keeps reminding himself that he only has two more weeks to go and then it will all be finished.

While out to retrieve helium from one of the harvesting machines, Sam crashes his rover and wakes up back in the base, being cared for by GERTY. He hasn’t been out long, GERTY assures him, but he needs his rest in order to properly recover. Sam can’t shake the feeling that something is very wrong and does some investigating which eventually leads him to... himself, still stuck in the rover. He rescues the other Sam, who refuses to believe that they’re both clones and continues to insist that he’s the original and that he’s going home to Tess and Eve.

Most of the movie involves Rockwell interacting with himself as the dual Sams, creating two distinct characters that are like Goofus and Gallant versions of the same guy. With these two characterizations, Rockwell proves once again that he’s one of the most dependable and charismatic actors working today, easily carrying the movie without ever wearing out his welcome. I would very gladly watch an Odd Couple in space type show that involved the Sams trying to live together without killing each other. Rockwell taps into some dark humour but also gives the Sams an emotional resonance that takes the film to the next level, allowing it to rise above some of the more conventional elements of its plot.

Moon works in large part because it finds the right balance between taking itself seriously and having fun with the genre. GERTY is like a kinder, gentler version of HAL 9000, which adds in no small part to the story’s suspense. Is GERTY really looking out for the Sams like he claims or do his ever shifting emoticons hide darker intentions? There’s something about GERTY’s calm, steady voice that is vaguely sinister and certainly rooted in the collective memory of that earlier robot. There are a lot of things here that are reminiscent of 2001 - although this movie is about a thousand times more accessible than Kubrick’s film - but at no point does this feel like a rip-off. Moon takes familiar themes and ideas and makes them its own.

Though Moon isn’t a film with a big budget or wall-to-wall special effects, it makes the most of what it does have and creates something really special. I think that this is a movie that people will still be talking about and praising years from now, when some of this summer’s more lavishly budgeted movies have been long forgotten. I can’t wait to see this again.