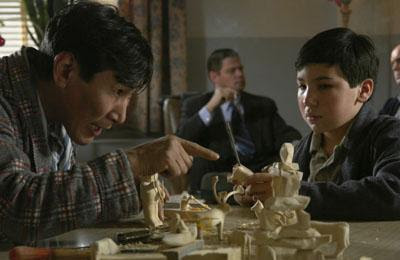 The Necessities of Life is a sometimes poignant, sometimes maddeningly sluggish film from director Benoit Pilon. It is not a bad movie – in fact parts of it are very strong – but it is a little less than effective. What saves it is the performances, particularly that of Natar Ungalaaq, who won the Genie as Best Actor for this role and is perhaps best known for playing the title character in Atanarjuat: The Fast Runner.

The film takes place in 1952, when Tivii (Ungalaaq) contracts tuberculosis and is sent to recover in a sanatorium in Quebec City. The situation is a difficult one for Tivii not simply because of his illness, but because he’s been uprooted from his family and home and sent to a place where no one speaks his language. The social disconnect that this causes, in addition to the stress of not being able to clearly understand what’s wrong with him and how it’s being treated, leads to depression and a wish on Tivii’s part simply to die. Wanting to help, Carole (Eveline Gelinas), one of the nurses, arranges for an Inuit orphan named Kaki (Paul-Andre Brasseur) to be transferred to the hospital so that he and Tivii might recover together and keep each other company.

Kaki’s arrival has an immediate and positive effect on Tivii, who is now not only able to speak to someone in a familiar language, but also able to communicate with the others through Kaki, who also speaks French. Kaki’s ability to assimilate with the rest of the patients is a blessing in terms of communication, but also somewhat problematic as far as Tivii is concerned because the more assimilated Kaki is, the greater the danger that he’ll lose touch with his cultural heritage. As he recovers Tivii decides that he wants to adopt Kaki, which leads to a new set of complications. The adoption request has to be approved by the church and because Tivii is not French, not catholic and, of course, not white, the church is reluctant to hand Kaki over to him. They prefer to see children adopted by “more conventional” families, though as Tivii’s supporters point out, Tivii’s family is “conventional” to Kaki’s experience. This scene and the implicit racism that it exposes is one of the strongest in the film and really gets to the heart of the story. Tivii has, and could provide for Kaki, everything necessary in life - shelter, food, family, and cultural tradition – but because Inuit culture is deemed inferior to the dominant culture, his request isn’t really taken seriously by those with the power to decide.

The cultural divide is the film’s primary concern, both in terms of Tivii’s relationship with Kaki and his relationship with Carole. Carole is a nice person and wants to help Tivii but when he makes a sexual overture – failing to see the racial divide that she sees so clearly – their already tenuous friendship is changed. “You don’t know whites,” Kaki explains after an obligatory “I told you so.” In a world where the prospect of an Inuit family adopting an Inuit child is treated as preposterous, the idea of a relationship between an Inuit man and a white woman is unfathomable.

The Necessities of Life is inarguably a film about something (which may sound like faint praise but how many films are, in the final analysis, about nothing?) and it successfully explores its subject from a variety of angles. The problem is that it is very slow and oddly passionless. Though I came to care about the character, particularly Tivii thanks to Ungulaaq’s performance, the ending left me strangely cold. It’s a good film, but it didn’t make an impact on me the way that I think it could have.

"The problem is that it is very slow and oddly passionless. Though I came to care about the character, particularly Tivii thanks to Ungulaaq’s performance, the ending left me strangely cold. It’s a good film, but it didn’t make an impact on me the way that I think it could have."

There you go. This passage of your review sums up my perception about Ce qu'il faut pour vivre. Notwithstanding Ungalaaq's performance, this films only cares about bringing you from point A to point Z even if, in the process, I went close many times to fall asleep. Although I didn't personally like the film (and didn't feel its impact the way I was expecting it), I recognized, in the end, that the film has a good script and a good ensemble performance by the cast.

Yeah, it's strange. The movie definitely has ideas and there's certainly a great deal of skill in front and behind the camera, but there's too little energy in the final product.

Are you people nuts?
This was a brilliant, beautifully composed film in ever sense of the word.
There can be only one explanation for your reaction to the film and that is...you are very slow and passionless.