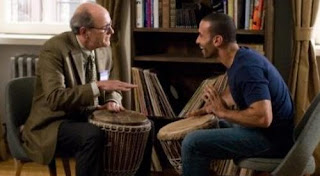 The Visitor is a tricky little movie: it starts by letting you think it’s going to be one thing and then it switches gears and becomes another, but remains wonderful nonetheless. Every once in a while as a filmgoer you’re fortunate enough to see a movie so rich and alive that its characters stay with you long after the story is over. The Visitor is one of those movies.

Walter (played brilliantly by Richard Jenkins) is a widower and university professor who has largely given up. He has no connection to anyone or anything, even his work which, after 20 years, has become meaningless to him, an exercise in repetition. He’s co-authored a paper with a colleague - though he confesses that she did all the writing and all he did was read it over for her – and when she’s unable to present it at a conference, he’s sent in her place. The conference is in New York, where he still keeps an apartment even though he’s never there. Arriving there he discovers that someone else has been making use of it: Tarek (Haaz Sleiman) and his girlfriend, Zainab (Danai Gurira).

Walter lets Tarek and Zainab stay and Tarek teaches him to drum. I’m reluctant to reveal much more of the plot because it turns in some surprising ways, dexterously sidestepping the plot developments that you think you can see coming to set itself in a different direction. I will say that a fourth character is introduced, Mouna (Hiam Abbass), who is Tarek’s mother and who has a profound effect on Walter. I will also say that the title has multiple meanings. Tarek, Zainab and Mouna are each, in a technical sense, visitors in the States and, at different times, in Walter’s apartment. But Walter, too, is a visitor, both in the way that he arrives at his apartment and seems more like a guest than a host, and in the way that he’s the only person able to go and see Tarek when a misunderstanding makes it impossible for either Zainab or Mouna to be with him.

Writer/director Thomas McCarthy is very smart in the way that he lets the story unfold. He allows scenes to develop their own pace and rhythm, allows the characters room to breathe and to grow in a natural way. There is not a single thing about this movie that feels forced, and that is as much a credit to McCarthy as it is to the actors, each of whom seems to fit so effortlessly into their respective roles. When you watch these four actors - and in particular when you watch Jenkins and Abbass, who light up the screen in their scenes together – you see minimalist acting at its best. A lot goes unsaid in this movie, expressed instead through gestures and body language.

The Visitor is a movie that is perfect in so many ways that I find it difficult to fully express my admiration for it. I can only hope that as the year comes to a close and awards begin to get handed out, that some attention can be paid to this film, which is so deserving of recognition for its screenplay as well as the performances by Jenkins and Abbass.