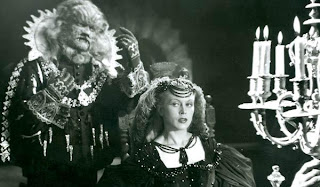 Jean Cocteau’s take on Beauty and the Beast is a beautiful fable that floats dreamlike across the screen and never falters even for a moment. Like the rest of Cocteau’s work – both as a filmmaker and in other artistic mediums – this story is brought to life in a surrealist style and with a great deal of attention paid to the aesthetic details of the mise en scene. It’s a wonderful, unforgettable rendering of the classic story.

In the film, a disgraced and debt-ridden nobleman wanders out of the fog and the forest and into a seemingly empty castle. He eats, he sleeps, he wanders the grounds, and then he plucks a rose from a bush, having promised one of his daughters that he would bring her such a treasure. As soon as he takes the flower, the Beast (Jean Marais) who lives in the castle emerges from the shadows. The roses, it seems, are the only thing he values in the castle and to have one plucked is the greatest of insults. He agrees to let the man leave alive on one condition: either he returns to pay his debt with his life, or he talks one of his daughters into taking his place.

He returns home to relate his tale and, essentially, to say goodbye before returning to meet his fate. Belle (Josett Day), the daughter who had requested the rose and the only of his children who is pure of heart, decides to sacrifice herself to the Beast to save him. She’s taken to the castle where she encounters the Beast and is overcome with horror. The Beast, however, immediately falls in love with her and instead of killing her, tries to overcome his beastly nature. Every night he asks her to marry him and every night she turns him down, though she does gradually come to care for him.

Opening the film, Cocteau makes a formal plea for suspension of disbelief, a plea which is a tad unnecessary because the world he creates is so magical and enchanting that it’s easy to slip into it completely. The Beast’s castle is a particularly wondrous creation, a place where hands and arms and faces are part of the furniture, where doors are opened and closed by invisible hands, and where a mirror can show you what is happening miles away. The way that Cocteau constructs scenes helps as well, particularly in an early scene where it’s made to look as if Belle is literally gliding through castle. The elements of the production are cohesive enough that no one element is ever distracting in its strangeness.

As the star-crossed lovers, Day and Marais (who does double duty as the Beast and Avenant, another of Belle’s suitors) play their roles in an appropriately simplistic way. Fairytales aren’t generally known for the depth of their characters and Belle and the Beast are as broadly drawn as any others, though the Beast is given some dimension due to the fact of his dual nature. What’s important is that they fit with the rest of the narrative – and they do, their seemingly effortless performances adding a great deal to the film’s charm.