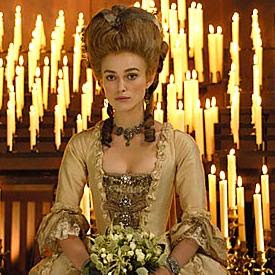 I love a good costume drama, which is a shame for me since over the last couple of years there’s been such a dearth of really good ones, ones which seem to have a purpose beyond their costumes and art direction. The Duchess is an exquisitely realized film, beautiful in its costumes and art direction (special mention to the team behind Keira Knightley’s miraculous hair), and rich in its story and performances. It is also a film with a real and discernable purpose, one which it exploits to the fullest.

Knightley stars as Georgiana Spencer, who becomes the Duchess of Devonshire when her mother (Charlotte Rampling) comes to an arrangement with the Duke (Ralph Fiennes). Despite hardly knowing him, she’s happy with this development, having been raised to aspire to little more than a good marriage. It doesn't take long, however, for her to lose whatever illusions she once had: she and the Duke have nothing to talk about, he makes no effort to hide the fact that he has mistresses, and he brings an illegitimate daughter into the house. Georgiana takes all of this in stride; it isn’t what she expected but she can accept things for the way that they are and even comes to love the little girl as if she were her own.

It isn’t until Georgiana develops a friendship with Bess (Hayley Atwell) that the union is truly ruptured. The Duke makes Bess his mistress and insists on having her (and later her three sons) live with him and Georgiana. Georgiana’s anger is given multiple dimensions: the Duke is desperate for a son and seeing him with Bess’ three boys makes Georgiana feel like a failure, as all her surviving children have been girls; there is also the fact that it ruins her friendship with Bess, something which she describes as having been the one thing that was hers and hers alone; and of course there is sexual jealousy, though it should be noted that she seems more jealous over Bess than the Duke, the revelation of the affair coming shortly after a brief pseudo-lesbian moment between Georgiana and Bess.

Once again Georgiana tries to make the best of things, seeing in this situation an opportunity to have her own affair with Charles Grey (Dominic Cooper), whom she loves and who loves her. She attempts to make a deal with the Duke, only to have her proposition thrown back in her face. “I don’t make deals,” he tells her and then proves to her just how easy it is for him not to have to. At its core the film is a deep and thoughtful examination of the balance of power between the sexes, and of the role of women in society and in marriage. A lot of parallels have been drawn between Georgiana and Princess Diana, but I think that misses the point. The value of this film lies more in what its relevance to what's going on right now than what was going on 10, 20, or 25 years ago, and I think that all you have to do is look at the current US presidential race to see that. Georgiana has ideas and an interest in politics, but all people want to talk about is how she looks and even her political allies see her most important contribution as her ability to gather a crowd. Moreover, the criteria by which a woman (particularly one in the public eye) is deemed worthy hasn't fundamentally changed: Georgina becomes worthy once she gives birth to the next Duke of Devonshire; the Republican party seems content to build their campaign around the idea of a working mother as Vice-President (though, in fairness, Sarah Palin’s politics leave little else to brag about). Motherhood was and remains a defining factor in determining a woman's place in - and value to - the world.

The double standard is something that has been explored before but what impressed me most about it here was the balance the film managed to find. The Duke, while not a nice man by any stretch of the imagination, is not a monster either. When he sees the children playing and remarks to Georgiana that it must be nice to be so free, we know that he, too, is trapped by what society expects of him, by a role that he is being forced to play. Fiennes delivers a great performance as the Duke, the cold and weary center around which chaos ensues. It is Knightley, however, who carries the film so firmly on her shoulders. It’s a great performance and The Duchess is a film fully worthy of it.

I like that you touched on the complexity of the Duke's character. This was one of the most interesting facets of the film for me.

As someone who particularly likes costume dramas, I'd very much like to hear what you have/had to say about Marie Antoinette. I really liked it, but I'm in love with Sofia Coppola, so I'm biased.

I like that you touched on the complexity of the Duke's character. This was one of the most interesting facets of the film for me.

As someone who particularly likes costume dramas, I'd very much like to hear what you have/had to say about Marie Antoinette. I really liked it, but I'm in love with Sofia Coppola, so I'm biased.

I haven't seen Marie Antoinette, actually. I'm not much of a Sofia Coppola fan, to be honest.