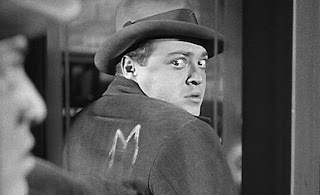 Fritz Lang’s M is a taut crime drama which forgoes the usual preoccupations of the police procedural story to concentrate instead on larger social questions. This isn’t a film that’s about whether a criminal will be caught and how he will be punished, but is instead about the society which delivers such a criminal into the world. It’s an uncompromising film about a brutal, ugly world, and it’s a masterpiece of tone and storytelling technique.

The plot of M hinges on the search and capture of a child murderer played by Peter Lorre. We meet him first as a shadow looming over his next victim and in certain respects this is as close as we ever get to him. He gives an impassioned speech at the end which illuminates – to a degree – his psychological state, but we don’t really get to know him, nor are we meant to. The film is far less concerned with the hows and whys of his crimes than it is with how his crimes affect his community and with what that tells us about the community itself.

The police are, obviously, under pressure to catch the killer, but local criminals have a vested interest in his capture as well. With the heat turned up, the police are especially attentive to and disruptive of the underworld dealings which had previously carried on with relative ease. Using beggars as their spies, the criminal community discovers the identity of the killer and opt to bring him to their own kind of justice with a mock trial and plans for an execution. The scenes of the hunt and capture of Beckert (Lorre) are extremely well done, especially the sequence which finds him hiding in a storage area, trapped like an animal with nothing to do but wait for the hunters to find him. The notion of Beckert as animal is further explored during the “trial” when he insists that he can’t be accountable for his crimes because he was acting on an impulse he can’t control.

The world created for us in M is one of shadows and decay, corruption and hatred. There is no doubt that Beckert is guilty, his crimes reprehensible, but what of the people who want to bring him to justice? Lang contrasts scenes of the police strategizing around a table with scenes of the underworld figures strategizing around a table – if the two groups are so similar (almost indistinguishable, in fact), what hope is there for justice? When Beckert is captured, the tribunal takes the form of a court complete with prosecutor, defence, and jury. It isn’t the crime itself but the corruption of systems of justice that Lang is focused on.

Mob mentality plays a large role in this exploration. Spurred by fear, individuals who are otherwise reasonable find themselves swept up in crowds, turning on their neighbours at the slightest provocation and acting out their fear through violence. M was made on the cusp of Hitler’s rise to power but it presupposes the mentality that would pervade the nation under his rule and which would play a part in driving Lang out of Germany for good. Watching it in this context only makes it all the more fascinating.