1927 is a film year I’ve found myself especially interested in lately, partly because I’m still in the process of discovering it, and partly because it’s generally a landmark year for films. 1927 is the year that The Academy of Motion Picture Arts and Sciences was founded and also the year of The Jazz Singer, the film that made talking pictures the rule rather than the exception. Although studios would continue to produce silent films for a few more years, sound quickly came to dominate and the popularity of the new format sealed the fate of the old one. 1927 was the last great year for silent films and a great year in film full stop, with many enduring classics being produced and released:

Sunrise: My favourite film from 1927 and one of my favourites of all time. F.W. Murnau's graceful masterpiece won a special Oscar as Best Unique and Artistic Production. 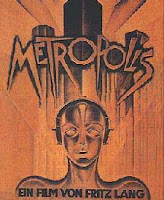 Metropolis: Fritz Lang's seminal science fiction film continues to influence films even 70 years after its release. Echoes of Metropolis can be heard in Frankenstein, Blade Runner, and Star Wars amongst others.

It: Over the decades Hollywood has crowned a number of "It Girl"s with varying levels of success, but Clara Bow was the very first, so named for her role in this film. Unfortunately for her she was also one of the many actors who wasn't successful in making the transition from silents to sound.

The General: Buster Keaton was a master and made a number of great films, but I think this one might be his most perfect. Well crafted in every respect, this is a movie that I can watch over and over again.

Wings: The first Best Picture winner is a sweeping World War I epic that has it all: action, romance, tragedy, and a star making appearance by Gary Cooper in a small role.

Napoleon: Abel Gance's staggering epic about the rise of Napoleon Bonaparte. Employed some technical innovations, particularly in its use of handheld cameras.

October: An epic about the 1917 October Revolution, this film by Sergei Eisenstein had the unenviable task of following up his masterpiece Battleship Potemkin.

As if all that wasn't enough, 1927 is also the year in which the great Barbara Stanwyck made her film debut in Broadway Nights.