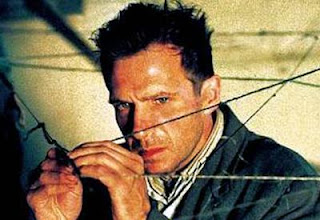 Spider is a creepy and challenging film from director David Cronenberg. I’m going to approach this one in a different way than I normally would, looking first at what literally happens on screen and then at what I believe happens beneath the surface. I do this for two reasons: first, our protagonist, through whose eyes we see everything, is not exactly a reliable narrator. Second, this is the kind of movie that just begs to be interpreted.

What we see is this: Spider/Mr. Cleg (Ralph Fiennes) has just been released from a mental institution and goes to live at a boarding house run by the fierce Mrs. Wilkinson (Lynn Redgrave). He begins writing in a notebook, recreating for himself the events that led up to the death of his beloved mother (Miranda Richardson). His father (Gabriel Byrne) takes up with a local pub tart named Yvonne (also played by Richardson, though it’s hard to tell sometimes because she creates two such distinct characters). Mr. Cleg murders his wife and then moves Yvonne into the house. Spider is, obviously, disturbed by this and comes up with a plan to kill Yvonne by turning on the gas stove while she sleeps. Afterwards, he’s sent to the institution.

My reading: Spider (played as a child by Bradley Hall) is a disturbed little boy who lives in an insulated world of which his mother is the centre and his idea of perfection. He is disturbed by displays of female sexuality, particularly in two instances: first when he’s sent to the pub to get his father and is flashed by a female patron (Yvonne), and second when he looks out his window and sees his parents engaged in a passionate embrace in the garden. Seeing his mother in this way makes Spider equate her in his mind with women like Yvonne and thus his perfect mother becomes tainted. In order to purify her, Spider must destroy her, but he isn’t psychologically equipped to deal with this idea and so creates an elaborate fiction in his mind involving the affair with Yvonne and murder of Mrs. Cleg by her husband.

There are a few reasons why I believe this, not least of which is the fact that Yvonne and Mrs. Cleg are both played by Richardson. Richardson will also appear briefly in a third role, stepping in as Mrs. Wilkinson for a few scenes, which demonstrates how easy it is for Spider to project the image of his mother on other women. There’s also the fact that Spider “remembers” a number of events that he did not actually witness, these scenes encompassing both the affair and the murder. Finally, there’s the fact that the woman who falls asleep when Spider turns on the gas is Yvonne, but the corpse brought out of the house afterwards is that of Mrs. Cleg.

I’m of two minds about the effectiveness of Spider as a film. The story is well constructed and Cronenberg creates a palpably grim and grimy atmosphere, but there’s something kind of flat about the film as a whole. At times it feels more like an exercise in psychological immersion than a film, which gives it more of an academic than entertainment value.

Wow, I'm in awe of this in depth review. I found this film much too dense to be enjoyable.

Thanks. I wouldn't say I enjoyed it as much as I appreciated the effort and the performances. It does lean a little far into self-indulgence.