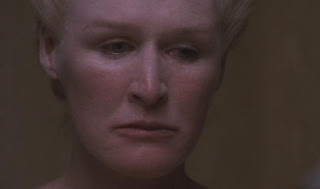 Year: 1988
Director: Stephen Frears
Great Because... it's a moment of comeuppance so completely deserved and yet so utterly merciless that it almost - almost - makes you feel bad for the reprehensible manipulator you've been watching systematically destroy everyone around her for the past two hours:

After a lifetime spent manipulating people and demolishing lives, Madame de Merteuil finds herself undone by her own game. Having set in motion the destruction of Cecile’s innocence in addition to the untimely deaths of Madame de Tourvel and former ally Valmont – all of it with a smile on her face – Merteuil finds her victory short-lived.

Booed out of the opera, cast out of the social world she was meant to reign over, Merteuil finds herself defeated, humiliated and utterly alone. Contemplating her future as she removes her makeup - leaving herself more exposed and vulnerable than she has ever been as she finally removes her mask - she seems to grasp the utter futility of the effort: there is nothing left for her anymore, the only direction to go is down. It is all over.

As much as I like Jodie Foster (who won Best Actress for The Accused), I cannot believe that Glenn Close didn't walk away with that Oscar for this one scene alone, let alone for her performance in the rest of the film. This is a scene of absolute perfection in every sense.